Here it is. Eleven years and twenty-two movies, culminated tonight with myself, two very dear friends on either side of me with two hundred and fifty or so people in our theatre. The house went dark and the trailers rolled giving us nothing unexpected in that vein. Then it went black and you could hear everyone hold their collective breath wondering how it would start. Then it began. Three hours later it ended. My companions (makes me sound like a Time Lord when I say that) and I sat there and we discussed what we experienced. We then ran to the bathroom (ahead of the line *cackles*), then continued to discuss outside for a good half hour pausing only for when people were entering the theatre. Seriously don’t be the guy that doesn’t. We hugged, then headed home; both of them wondering how I would review this movie – and retain my spoiler free style.

Again I write the most useless review in all of history as literally everyone will go see this that had any intention of it with or without my input. Now, my opinion on Infinity War is often discussed and rather unpopular. I didn’t like it. To me it was meh at best, and often the more I think about it the less I like it.

That is not the case here. This was the emotional roller coaster I was waiting for. As one of my companions said, this was Marvels equivalent of “I told you that story to tell you this one” and nailing it.

I unambiguously love this movie.

To paraphrase another one of my friends, “I have many feelings right now.” This is still the case.

Ok, but does it have flaws?

Of course it does. There’s some technical tracking shots I wasn’t particularly fond of, even if I understand why they went with them. There’s a handful of scenes that went too long or another too short. Yes, there is a scene that runs far too long and is not as funny as anyone involved should have thought it was. They could and should have done better than have that problematic beat. It does have a Return of the King kind of ending but how could it not? This is “END GAME” its the end. There’s a lot to wrap up.

The Russo Brothers said there are shots in the trailer intentionally for the trailer only. How bad was that?

It wasn’t. You’re safe. I do have issues with the concept of deliberately lying to people with a trailer. I question that integrity and would encourage Hollywood to not do that. There’s a lot you can do without lying to your audience and still get butts into seats. That goes especially for a film like this where they probably could have just put the title up and people would have been here to see it. See Batman 1989 for reference please.

So what did they do right – specifically?

Many of the shots, one in particular in Act III are beautiful. The character moments I was missing from Infinity War are here and in spades and it pleases me to no end. This was what I was waiting for and I received it with very little to complain about. Alan Silvestri continues to manipulate with the music, but that is kind of the point. The audience cheered when expected including me and my black little heart. They cried when expected too, also including me. Don’t even think for a moment that’s a spoiler. There’s a metric ton of appropriate emotional beats running through the current of this movie that will get you going.

Will you watch it again?

In theatres? Let’s be fair there was a brief debate about doing it again tonight if the next showing had an open seat.

So you’re buying it too eh?

So you didn’t talk about the directors, writing, or acting?

Noticed that too huh?

Directed by Anthony and Joseph Russo. I’ve said all I need to on them. Maybe another time I will do a deep dive into what I see their cinematic vision as and their directing style.

Written by Christopher Markus and Stephen McFeely. I’ve covered them too in the last review or another one. It’s hard to talk about things that are unchanging.

Acting? Every last cast member was in it to win it. Whatever it takes wasn’t just a tag line for the trailer, it was how the actors played their parts. I have absolutely no complaints, save the one mentioned in the flaws.

Avengers Endgame is the finale of an epic and how to do it right. I enjoyed the hell out of it and I think most people will as well.

Shazam! was great, but until next time True Believers,  Make Mine Marvel! 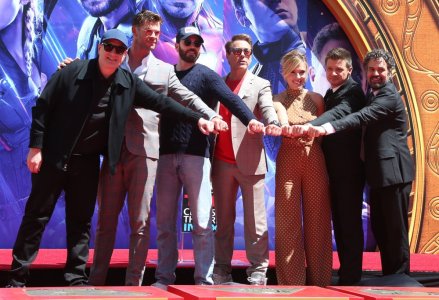