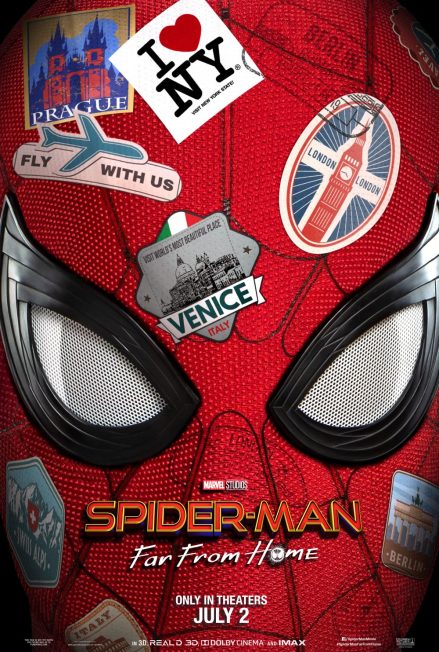 I really can’t write this review without some Endgame spoilers as everything is driven by the events of that movie. Granted the trailers alone give it away so I am not too worried, but be warned. This movie marks the official end of Marvel Phase 3, not Endgame. What does that even mean? Well Marvel has been approaching their own movies in phases, with Phase 1 culminating in avengers, Phase 2 oddly ended with Ant-Man rather than Ultron, which I suppose makes this being the end of 3 not the strangest thing. This is not so much a denouement to Phase 3 as it is an epilogue that bookends the series and answers a question everyone was sort of asking after Endgame; what next? What is the actual impact of The Snap and its return is? What does losing Iron Man and the Avengers look like? What does the impact on every day people look like after a galactic threat? A  good bookend would answer those questions.

Is Spider-Man Far from Home or the mark?

So the story does answer some of those questions really well and others not so much.  The opening is more or less an exposition dump from the school vlog/news given to us by Betty Brant; which explains to the audience “Previously on Spider-Man”. Is it a bit convenient that *all* of Peter’s closest friends, frenemies, and Aunt May were affected? Yes. Let me ask you another one though in response. Is it also very comic bookish? Also yes. The point of a good Spider-man story is not so much the epic show downs, but instead the relationships he has and strains with those around him as he tries to lead a double life. Made worse by being a minor instead of an adult as he technically has even less autonomy and the excuses are well…bad every time he needs to vanish. Far from Home has all of this in spades, perhaps too much though. The movie also relies on an inordinate amount of awkwardness and embarrassment type humor to drive the story. I absolutely detest that. Many will find it acceptable and part and parcel with a teenager based movie. As someone who was bullied through school I never find it humorous and just instead feel it uncomfortable and hard to watch again and again. Even a third act close for much of the movies humor around this topic just reinforces it.

I suppose with the writers from American Dad, Drawn Together, and Crank Yankers being given more reign this time than they were with Homecoming it makes sense. This isn’t to say the screenplay by Erik Sommers and Chris McKenna is a bad one. It’s actually a very solid story beyond those beats. Peter desperately trying to have a normal life is even for a summer and trying to find his place in the world after the death of his surrogate father Tony Stark. While the line from the trailer is important “he’s been to space” is used as a joke to move Peter forward, consider the pressure of that. Everything he has seen and done in such a short time and then to lose his touchstone and guidance immediately upon his own return from death. Can he find a brief, but fleeting sense of normalcy in all of this even with perhaps finding a bit of romance with MJ amidst the field trip to Europe.

The direction of Jon Watts is consistent with Homecoming and he understands how to hold on the more emotional moments of the film and let some of the conversations happen “naturally”. You always have a good sense of the geometry of the fight sequences which are both visually interesting and engaging. Granted Holland is still just knocking it out of the park with the complexity of Peter as a character, but unlike the scene from the trailer ,which has been cut from the movie, we don’t get the humor of Spider-Man himself. I could have used some of that instead of the other stuff mentioned before. The movie though didn’t really have a good place for it either, so while I miss it I can’t see a place to have put it in when fighting Elemental creatures. Zendaya is captivating as this universes MJ and brings more complexity and nuance to the character than we’ve ever seen before and the movie benefits from it.  The one worth talking about beyond our two is Jake Gyllenhaal as Quentin Beck/Mysterio. He nails it. This is a perfect way to do a classic character with a schtick that should only work in comics and animation and make him live. They even made it so that his smoke filled helmet works. He’s a clever character and done well.

Far From Home isn’t far from the mark. It is a solid two hour romp that is a really good Spider-Man story. It’s a smaller one after a glut of world wide and galactic threats. It focuses on the characters and their interactions and Peter himself, having accepted he must be Spider-Man but not fully understanding what that means yet. The movie has some really solid emotional beats and follows the rise and fall really well and gives us a conclusion to both Spider-Man Far From Home and Phase 3 that we can live with.

This might be one of the last good high budget movies of the summer. It’s worthy of the 4th of July slot and overall is a really solid movie that doesn’t verge into great for me, but is very good overall.

Odds are pretty good that I will. I have Dark Princesses and Dark Court members who want to see it and I am ok with it.

Is this Marvel or Sony?

This is very much a Sony movie in the Marvel Cinematic Universe.

Well the trailer introduces the concept of the multi-verse and an in movie explanation with that aligns with comic canon that this is Earth 616; which is the main comics line. There’s a handful of others that are more and less subtle that made me smile.

I could have done without the excessive humor around embarrassment and uncomfortableness. The romantic beats work, but more than that, this is a Spider-Man movie. This reminds me of the comics I read as a little girl and I am pleased with the final result.