The exclamation mark is important if you want to get the right title when looking this one up. Now, I am just barely old enough to remember Shazam (1974) and Isis (1975) on reruns as a kid. 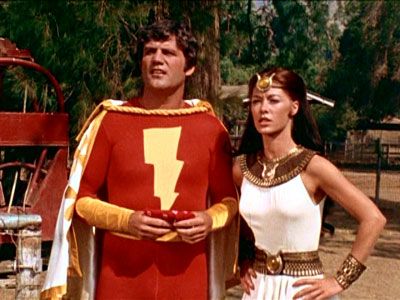 I of course have some of the 90’s and early 2000’s comics with Billy Batson and the rest of the Marvel family, oh yes. Thats right. I mentioned on a post about the recent Captain Marvel movie that there was some beautiful irony in putting the Shazam! trailer in front of that movie. So a bit of comic history, Captain Marvel was created in 1939 by Fawcett Comics and then was sued by what would eventually become DC comics for copyright infringement on Superman. The case went back and forth for a few years with the two settling out of court in 1953. The character went out of print shortly after due to declining sales. After the silver age of comics DC licensed the characters from Fawcett in 1972, but at this point Marvel had already established Captain Marvel and a trademark on it that forced DC to go with the title of Shazam. The character didn’t unquestionably and fully take his name as Shazam until the 2000’s. So there you go, you now know something you didn’t before.

The real question is should you watch the movie?

Let’s face it DC is hit and miss. Mostly miss in my opinion. Man of Steel doesn’t hold up as it did on my initial review and hundreds of people are happy to tell you why. BvS….let’s not discuss that. Wonder Woman certifiable hit, but a touch weak on the villain front. Suicide Squad, I like. Others don’t. I can see the criticism though. Justice League…mostly a miss, but so much closer than they had been before. Don’t @ me snyder fanboys – his vision wasn’t good. Aquaman, the box office and I disagree on how good this was, so its a solid ok; but still firmly in Snyders shadow. Shazam! is the first movie that is 100% out of it and it shows.

The story was written by Darren Lemke (Shrek Forever After, Goosebumps) and Henry Gayden (Earth to Echo); who basically made their paychecks with kids films. This might have been the stroke of genius missing or maybe just what a movie with a kid as the star needed. The story is good here and undeniably solid. There is some rather good show don’t tell storytelling through out the movie that is a breath of fresh air in the superhero genre; and while there is exposition only at one point does it not work. The meat of the story is around Billy and his search for his family and every line of it works. Every interaction with the foster parents, the other foster kids works. It was beautiful and heartbreaking to watch some of the scenes and really to give us a GOOD Foster situation in film. All too often you hear about “the system” and it’s shown as a meat grinder for kids who work their way out of it, and this movie turns that on its head and I love it for that. Director David F. Sandberg clearly is not the first choice I’d have gone to for a kid based superhero movie after his first two feature films were the 2016 horror film Lights Out and 2017’s Annabelle: Creation; but again this somehow worked. He shot a movie that is both heartfelt, heart breaking, and funny all at the same time and never loses sight that this is a kid who is becoming a hero.

The kid in question, Asher Angel (Andi Mack) as Billy Batson. Besides looking too much like Maisie Williams (Arya Stark) twin brother he has to carry the film as much as anyone, which is hard for a 16 year old. He does it though bringing the edge needed for a kid who is running away from everything in search of something he may never find, then is granted all the powers anyone could hope for and having to make some real choices. Angel is able to handle all the nuance needed for his character and Zachary Levi (Chuck, Tangled) as the older version of him captures the rest of it well. Points to the script, the directing, Levi, and Angel here as I really felt that this wasn’t a grown man being childish but a child trying to be a grown man. Jack Dylan Grazer (Eddie Kaspbrak from IT) has a lot of work to do as well as Freddy Freeman, Billy’s foster brother. Thankfully he is just as capable of carrying the torch and bearing the weight as Angel is. The two of them felt right in their roles and Grazer had to work with both Levi and Angel and make it feel that he was talking to the same person and was able to do so. Mark Strong (Kingsman, Sherlock Holmes) was clearly having a good time on set as Dr. Thaddeus Sivana. Here we have a competent villain who is a match for our hero, has motive, and is understandable. Strong was perfect for the role and the enjoyment he clearly had shows through in every frame.  I would be remiss if I didn’t call out the other supporting cast who really helped bring the heart to the movie. Marta Milans and Cooper Andrews as the foster parents were perfect and honestly, I wish those characters were my parents. The other foster children played by Grace Fulton (Mary), Ian Chen (Eugene Choi), Faithe Herman (Darla), and Jovan Armand (Pedro) are also quite perfect though of them young Faithe steals the show every damn time.

The effects on display are also really good guys. Like impressively so, with the flight, the transformations, the fights, all of it looking some of the best I’ve seen in years. Some of that comes down to the editors not hypersaturating the movie. The colour balance here is just perfect and only a touch off photo real with the reds and whites always being slightly brighter. This doesn’t look for feel like any of the DC movies or Marvel movies and I want more of it. I need more of this. Even the score is solid, though not as emphasized as I would like – I felt it and it played me the way it was supposed to.

Guys. This is good. This is really good. Like after the inspiration that Wonder Woman brings and the epicness of her film, this is easily my second favourite of the DC movies. This had the purity and heart that the original Donner superman captured but with modern film making techniques. If I want a good super hero movie that reminds me what it was like when the heroes cared about saving people and the movie showed it, when someone was just a GOOD person because it was the right thing to do – this movie is going to  be in that rotation. I am hoping and praying to whatever box office gods that listen that this can take and hold the box office for a few weeks and show DC that we want more of this.

Should i see it?

Yes. No question. Yes. On the Big screen.

Absolutely. I am going to be happy to have this in the collection.

You sure this was a DC movie?

I know right? This was closer to Black Panther than it was a DC movie. Great story telling, compelling characters. While the movie has a few moments that make me personally uncomfortable (Bullies, Family issues) the fact that i made me feel those moments is a tip of the hat in its favor not a strike against. I’m always surprised when I write my reviews. I sometimes expect them to be positive and they turn out fairly negative, or I expect them to be positive but then when I write it and think about it the review is glowing. This is one of the ones I am happy to say is in the glowing category.