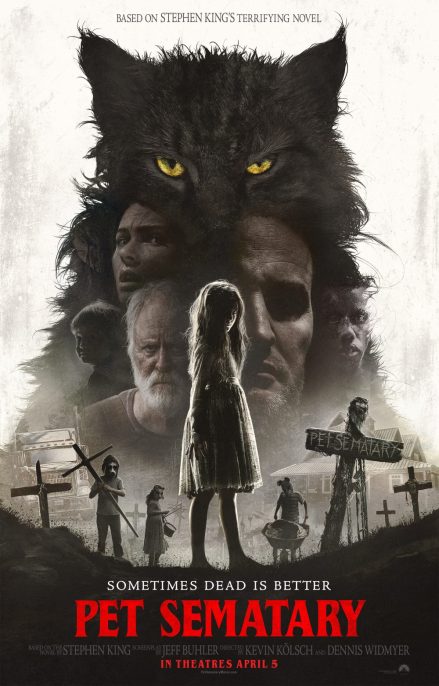 I saw a new meme yesterday going around. “What type of person are you based on the book you read in High School?” It had all the classics most of us had to read in the 80’s and 90’s. Me though? Didn’t really read them or pay much attention to them. I did however read Tommyknockers a few times and even had a greeting to one of my best friends (who will likely read this) during that time. We recently reconnected on FB and I used that to let him know it was me (I am a different than I was then). He’s also the one who gave me one of my fondest nicknames. So yeah in high school I wasn’t reading the required, I read Christine, Cujo, Tommyknockers, The Stand, and yes Pet Sematary. By that point I had already watched the 1989 movie a few times, mostly for Fred Gwynne’s last performance and my girl crush on Denise Crosby.

They say sometimes Dead is better. Should this have stayed buried?

Obviously based on the Stephen King novel of the same name, this time the adaptation of the story for the screen is done by Matt Greenberg. Greenberg has had some adaptation work for King before either in his writing work on Children of the Corn III or the amazing 1408.  He also provided us one of the better sequels in the Halloween franchise, H20. Unfortunately he is also the one who did the screen story for Seventh Son. Don’t look it up or watch it. The script however came from the mind and idle hands of Jeff Buhler of the Midnight Meat Train and last years…interesting series Nightflyers; and the mildly disappointing The Prodigy. This is very much an adaptation of the King story where it is far more faithful in spirit, but still not the book – so don’t go looking for that. The basics are there, a doctor, his wife, daughter, and toddler son move from the big city to a small town in Maine (c’mon it’s King you expect it to be anywhere else?). Their new home is beautiful if you can stand the tanker trucks doing 60 on a road that clearly should be a 30, and this creepy little town graveyard for pets way back in the woods. When the family cat, Church, dies thanks to one of the aforementioned trucks their helpful old timey neighbor introduces the father to what lies beyond the barrier in the Pet Sematary. Burying Church in that stony soil begins an ever darkening and maddening chain of events.

As you can tell if you are familiar with the 89 movie or the book the meat is there, the potatoes are there. It digs deeper than the last attempt and shows that the writers cared to do so, but I am not 100% sold it went deep enough. There is not a real fault with the script or the dialogue of the movie. The mistakes of the past are gone, but there seem to be new ones; where it feels like a late 2000’s adaptation. Everything you want is there, but some aspect of it doesn’t quite resonate. I feel that some of it may go to the execution by duo directors Dennis Widmyer and Kevin Kolsch; but again it’s hard to pin it down. Their staging is fine, the blocking is fine, the actors performances are fine. One or two of the visuals is a bit rougher than I think they should be, but others just work.

Jason Clarke (Winchester, Dawn of the Planet of the Apes) nails it as atheist doctor LouisCreed. I buy him as a man who is faced with the impossible and then an impossible choice. Amy Seimetz (Alien: Covenant, The Killing) carries the trauma of Rachel Creed’s childhood, well enough; but I felt absolutely no chemistry between her and Clarke. This isn’t to say they aren’t trying, because they are – it just doesn’t quite work. John Lithgow can do no wrong and while he lacks more of the folksy quality in Gwynne’s earlier performance he still pulls off Judd well enough; even without a good ayup.  Jeté Laurence, at age 12, as the daughter Ellie, has her work cut out for her, but I felt she did better than many in her age group ever could have; and unlike Seimetz comes across having real chemistry with Clarke.

On the technical side of things to say the movie is short is an understatement, with a 101 minute running time including credits which run for about 8 of those minutes there is little fat on the movie. Then why does it at times feel like it’s moving so slow? Yes, there’s a point to pacing it for tension, which it builds, but they did this at the sacrifice of something. A little effect here. A poorly executed dream like sequence there. A ghostly image that exists because it had to, but not because of service to the story. Also shooting in the summer when you are supposed to be in Maine in the fall? The lack of appropriate colour shows.

Pet Sematary is a solid horror film; its perfectly serviceable. One of Kings better film adaptations to be sure, but I feel it is a reactionary product. When IT blew everyone (and more than a few records) away in September of 2017 it was only a matter of time before people began to look for the next King property to remake. Sure this one had been in talks since 2010, but it was green lit in December of 2017 right as IT was wrapping its $300 million domestic haul. A rushed schedule had filming in late June 2018 wrapping August 11th. This has all the hallmarks of a studio absolutely trying for a cash grab and investing just enough to make the movie look good while doing it. The problem with moves like this by studios, they *feel* like they are a cash grab when you watch it. You can see where every single corner has been cut and while you can’t put your finger on whats wrong with the picture you absolutely know that something is.

What made IT work was the investment of time and care, the $35 million didn’t hurt either. The $21 million budget on this one with the time given shows. Yes, the actors care. Yes, the production crew cares. That also shows, but those edges, those frays, and uneven cuts. That reek of something that feels like a studios hand or perhaps a not as good as they need to be writer making a choice does it all a disservice. While there are plenty of movies who run too long, this one is about five to ten minutes too short. If this comes out with a longer directors cut I might be happier with the final product.

See Shazam first. It’s the superior movie this week, by leaps and bounds. That being said, while my critique is fairly harsh for the movie, I did enjoy it, but it was despite its flaws. This one is going to be VERY mixed and you’ll have to decide for yourself your tolerances.

So maybe, but unlikely.

Would you watch it again then?

Not in theatres, no.

Yeah, I’ll buy it. Like I said, I did enjoy it. I just have to call a movie on what I think is wrong with it. Clarke, Lithgow, and Laurence are absolutely enjoyable. Seimetz tries, but it doesn’t work.

This is one of King’s bleaker stories; which is saying something. The Stand at least had hope. You have kids and family pets dying and then coming back as something else, something different. You have a growing madness and desperation as you watch innocence die. That’s pretty bloody bleak. I knew that going in so that isn’t it. I don’t even mind the major change to the story for this adaptation, they made it work; but the movie lacks commitment or conviction.

I’m glad that this movie was remade. The 89 one is one of the rougher King adaptations, but I just wish a little more had been given to the movie.

Again I enjoyed myself, and the cover of the Ramones song Pet Sematary by Starcrawler. I just think we could have had more. Maybe the soil of my heart is too stony for this one.