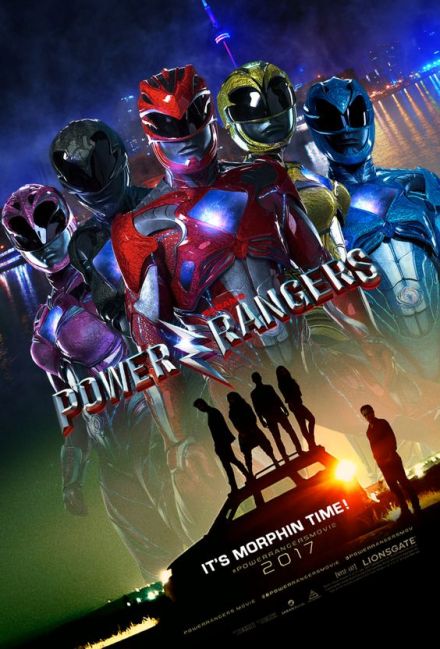 I really don’t know why I wanted to see this movie. I was not a fan of the show when it premiered the first time back in the early 90’s. I was a bit disappointed considering I had grown up on Voltron and thought I was getting a live action version. I was young. I didn’t know better.  So despite that the trailers did their job and I wanted to go see it. With that in mind I figure if I enjoyed the movie then it is a solid movie without nostalgia glasses getting in my way to either love it or hate it for its differences between then and now.

So should you go go to the theatre to see it?

I invoke the three writer rule as the movie goes to five. We have story by Kieran and Michelle Mulroney (Sherlock Holmes: A Game of Shadows), Burk Sharpless (Dracula Untold,  Last Witch Hunter, Gods of Egypt) and Matt Sazama (Dracula Untold,  Last Witch Hunter, Gods of Egypt) and the final screenplay by John Gatins (Flight, Kong: Skull Island). At this point unless I am given photographic evidence to the contrary I am going to say Burk Sharpless and Matt Sazama are a modern version of Alan Smithee. The real surprise here despite the rule being invoked – they told a decent story. Sure it’s origin story 101 but unlike so many other movies with a wide cast to introduce they actually let you get to know the characters. The dialogue, the character decisions, all felt natural. There’s one particular scene around a campfire that was in the paint by numbers guide, but it worked. No this isn’t going to win any awards for storytelling or doing something particularly new but it did its job. It does have a few plot holes you can pilot a zord through but you forgive them because the characterizations of your five mains are as strong as they are.

This is director Dean Israelite second feature film since Project Almanac; and while he shows more restraint than he did there he still has not quite mastered the camera. I will give absolute credit for trying a few things with the camera that worked, but then he went too long on them and it stopped working. I get the sense that there’s more to him, as overall the movie was surprisingly enjoyable. Directorially speaking the beats work mostly, the camera work is solid for a majority of the film and the performances and blocking are good. His sense of pacing was on point, but his tonal choices were a tilt a whirl of emotion. I remember looking to my sister during the movie going “well that was bleak” during one scene; yet they earned the beats they got and the emotions they drew out of me.

What takes the movie to the next level is the actors who had remarkable chemistry with each other. Dacre Montgomery as our Red Ranger Jason isn’t just a bland white guy lead. He tries to be more and largely succeeds; and I will be curious to see him in Stranger Things Season 2. British actress (of Indian origin) Naomi Scott (Lemonade Mouth) is our Pink Ranger Kimberly and much like Dacre really makes more of the character than I thought possible. RJ Cyler ( Me Earl and the Dying Girl) is our Blue Ranger Billy, who I am going to talk more about in a moment. Ludi Lin is Zack, the Black Ranger; which leaves us with singer songwriter Becky G  as Trini our Yellow Ranger.

Bryan Cranston returns to Power Rangers, this time as Zordon and I must say he makes an excellent face on the wall. Elizabeth Banks steals the show as a semi serious and surprisingly menacing Rita Repulsa. That isn’t to say there aren not fantastical elements to her performance deserving of a laugh but much like the heroes, her moments are earned well enough you enjoy seeing her.

Why did I not talk about the five mains more? Because they need to be talked about together. If you read my reviews with any regularity I speak of representation and how it matters. This movie has given us Asian, Indian, Hispanic, and Black actors in what is easily claimed as a superhero role. Ok so the movie hits you over the head with it with a line, but I forgive it for them actually bothering to do it in the first place. On top of that we have a character who identifies on the autism spectrum – and actually calls it out in film. This movie made a real effort to have multiple types of representation across the board and succeeded where other films fail. What makes it even better so it feels less forced than it is – the actors have amazing chemistry with each other. When two of the characters meet for the first time I was taken aback by how well they sync’d and felt right on camera together. This kind of interaction continue to go on as the movie moved forward; furthering my surprise.

So we have good representation and good actors who connected with a decent script and pretty solid direction – this lets me overlook the movies flaws.

Oh yes. There are flaws.

As I said, the camera work is improved over Project Alamanac, but definitely still needs work. I would shake the director of photography to make him use a steady cam, but I don’t think he’d notice the motion as there are more than a few shots that had noticeable wobble that didn’t need it. The fight sequences when the camera is still? Great. When it’s moving. Kinda a mess. The same can be said for the Zords. I know there’s a T Rex and a Pteranodon, but due to camera movement and poor design of the robots the others are kind of a mess. There are a few plot holes that are glaring and can leave you with a lot of questions if you think about them too long and some effects work – others not so much.

Power Rangers is a surprisingly good movie. There are a ton of callbacks to the series that even I picked up on. It, in my opinion, has a lot of heart to it and I feel there was some passion by the cast and crew in getting this made. It while following the formula of origin stories and generic teen filler movies somehow stands apart from them. The production crew was serious about making this as good a movie as you can while still embracing what makes it Power Rangers.  If anything, they did lose *some* of the hokeyness that was part of the charm, but the cast’s charm overpowers that flaw.

It is different than the show as I know of it, but if you are even remotely interested yeah its a very entertaining ride.

Would you watch it again?

Really? You going to buy it too?

So Power Rangers the show is very kid friendly no matter the age. 5 and under I’d keep out, maybe 7 and under on this one. This is a solid PG film that wanted to dip its toes into PG-13 (well modern PG-13).

I like the movie and don’t have issue recommending it at all.

Oh and there’s some product placement in the movie used as a punchline – and I didn’t mind it. It worked and I liked it.

So where’s Beauty and the Beast?

I was on vacation. Haven’t seen it yet. Might this weekend. If so you’ll get a review.