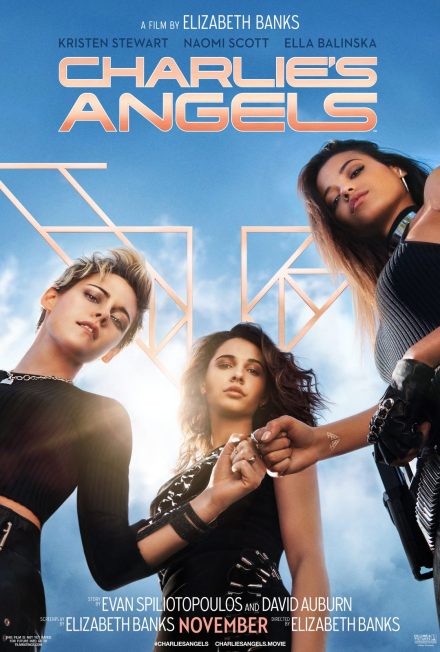 I have missed you my readers. Have you missed me? There are a few reviews coming that I owe you, but first the viewing tonight. I had hoped to get this one to you last night, but there was a plague upon my house which kept me more or less incapacitated for several days. After some blood letting, no I am not saying whose blood, I am almost fully operational again. The members of my Dark Court went last night to the preview screening and all assured me I would enjoy this film. They gave me no spoilers, they know better. Now of course I remember watching reruns of the series as a little girl, Jaclyn Smith, Cheryl Lad, Kate Jackson, Tanya Roberts, Farrah Fawcett. That…might explain a few things. I have also watched both the 2000 and 2003 movies, not particularly fond of the camp surprising no one. I did miss the 2011 series. Near as I can tell so did everyone else.

I suppose the real question then is, should you say Good Evening Angels?

The story for this film was written by David Auburn ( The Lake House) and Evan Spiliotopoulos (Hercules, Beauty and the Beast 2017), which creates an interesting mix of a Tony award winning writer who also did a romantic drama and a guy who has mostly made a lot of the Disney animated sequels. Not sure what to make of that mix in styles, but when you add Elizabeth Banks (Power Rangers, Brightburn) on the screenplay and in the directors chair it begins to take shape. Banks went mostly under the radar for me for years until I saw her in Hunger Games as Effie, then appearing as Gail in Pitch Perfect. I admit, I discounted her. I would say around Mockingjay I saw what was there all along (I have a bias against comedy you know this), then as Rita Repulsa in Power Rangers. She cemented her chops with me in Brightburn, but thats in front of the camera. What about behind? I am not a fan of her directorial debut Pitch Perfect 2, its fine, but didn’t resonate nearly as well as the first. She hasn’t gone behind the camera in 4 years and she’s been learning. More on that in a second.

The story presented is a long episode of the show. Someone has a secret, someone doesn’t want that secret shared. Spy games and spy vs spy ensue. Pretty clothes, disguises, and nifty gadgets follow. Women power in all the best ways. Basic works here. To embrace the premise of the show and take it seriously, which the movie does, you do not need overly dramatic complex or overwrought plots. You need a McGuffin, multiple locations, and some highly skilled Angels with just an air of mystery to the plot enough to satisfy the casual movie goer. It does that. While the movie does take itself seriously, it doesn’t take itself too seriously. It knows where to poke, it knows where to have fun even at itself. This is what separates this particular remake of a 70’s series from so many of the others. Others go for the hard over the top ridiculous comedy, this is far far more restrained. Granted it is over the top in its own ways, but the humor in the movie is pure and good natured and charming.  Thats screenplay and directing done right Mrs. Banks

That also comes from the performers, Kristen Stewart (Personal Shopper, American Ultra), Naomi Scott (Power Rangers, Aladdin), and Ella Balinska (first major theatrical role) as our Angels. They have to carry this movie not “just by being pretty” (but they are three of the most beautiful women on the planet imo), but they have to have the acting and action chops as well. They do. I know a lot of people still write off K-Stew and well…in my opinion they are wrong. She isn’t the performer she was in 2008. She knows who and what she is now and as the saying goes “brings her whole self to work” and I can tell you that it shows. She’s both charming and funny in this role, while still pulling off a number of decent action pieces with her in frame. Scott continues to hold her own and shows she can and should continue to be trusted as her career continues to grow. I will admit Balinska almost steals the show from both of them a number of times, including one particularly adorable scene with Noah Centino. I could go on to list all the co-stars and cameo appearances in this movie but we’d be here all night.

The movie is fantastically well paced and trimmed to cut all the fat away giving you the bare necessities and deliver on everything the trailer promised. Just shy of 2 hours there’s very little to cut from this movie without sacrificing some element that keeps it all working. It also keeps an interesting sense of permanency with some aspects to the movie where certain things are not undone and I am pleased for it. There are dozens of nods and winks to the original series and the early 2000 movies without being too overt or fanservicy. Movies risk with that going “remember this better thing?” yeah they avoid all of that. All of it.

I really enjoyed the hell out of this adorable picture. This will likely make my top list this year.  Yes, I am serious.

If you had any interest in it I can confirm you will get your monies worth. If you were waiting for confirmation from the anti comedy girl that its palatable, you got it. If you weren’t sure – I can comfortably recommend this for a beautiful popcorn bit of fun.

My Dark Court wanted to. One of them was able to tonight (the others had prior commitments) I stand by them on this and would.

Are there any problems with it, like at all?

Of course I am all for the pro feminism aspect of the movie. It does not even remotely shy away from it and a few times beats you over the head with it. You know what? GOOD. Let girls who come see this see themselves as bad ass action stars. Let them see they can wear pretty dresses, kick ass and save the world – and have fun doing it. We don’t need every movie like this to be Atomic Blonde, this is a nice accessible and fun balance to the mix and I encourage people to take their families to it.

Oh and yes it passes the Bechdel and Mako Mori tests by an order of magnitude.