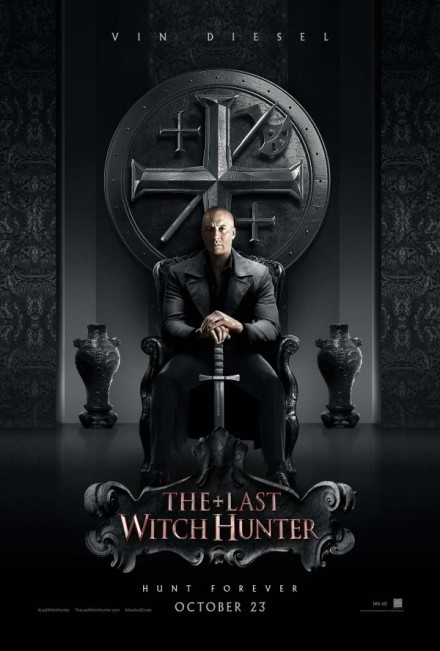 Thanks to Tucson Comic-con having made a deal with Lionsgate, I had the opportunity to see this movie on Tuesday. Plenty of geeks in the audience and a row of local professional reviewers behind me. More than a few geeks were discussing their Star Wars Force Awakens tickets, or lack there of, but the general mood of the theatre was fairly positive. Talked to the pro’s a bit, desperately wanted to plug my site and didn’t, tried to sell them on Crimson Peak. The lights didn’t dim, the sound didn’t come on, but then they fixed that and the movie started.

How was it though?

Let’s begin with one very basic conceit, all rumors and stories seem to indicate the character was based on/inspired by a Dungeons and Dragons character of Vin Diesel. The man is a geek and is proud of it. So this knowledge going in made me more inclined to be favorable to the movie. It does risk the ire of the three writer rule with Cory Goodman, Matt Sazama, and a name so odd if it isn’t a pseudonym I almost feel bad: Burk Sharpless. Goodman’s only other writing project was the critically panned Priest. Sazama and Sharpless provided us Dracula Untold. So we have three writers who don’t do particularly good with deep stories, but enjoy a specific type of atmospheric and supernatural film and this shows in the final product.

Hellboy, Constantine, Mortal Instruments: City of Bones, and Beautiful Creatures all could fit in the world they crafted without even batting an eye. Honestly, I would watch the hell out of that universe if given an opportunity. Part of that comes from the vision of the director Breck Eisner. Eisner has very little in the way of directing credits, but can tout such films as Sahara and The Crazies. He doesn’t do much new or really draw much out of his actors that wasn’t already there, but at least he committed to the story. A few of the set pieces made me smile and want to visit them and if he had a hand in that, then he did ok. That’s the best I can give there.

I wish I could say more on the acting, but it’s pretty flat overall. No one reaches, no one does more than the bare minimum they are capable of. Michael Caine is the wise mentor. Elijah Wood is the young protege. Rose Leslie (Ygritte from Game of Thrones) gets to do more than she did in the show, but not too much. It’s a weak characterization given to someone who can do more. The same can be said of Diesel, there’s just no passion to the role, no weight, no effort. He goes through the motions, which is disappointing considering what I mentioned earlier. Maybe he was just too comfortable? The acting isn’t bad, that’s important to note, it just isn’t special or particularly strong or memorable.

Now, while I praised the world building which I did enjoy quite a bit, the overall plot and characterizations are relatively bland, rushed, and ultimately hollow. I cared about Leslie’s character Chloe because I have a crush on the actress, little else from the script made me care. She’s also got the veneer of feminism. She appears to be a strong, independent, and powerful character; yet barely does much on her own. Disappointing. Same can be said of Diesel’s character, which had so much potential but it was wasted by the script itself. The story had such potential for him.

From a technical and visual standpoint, the movie is ok. Most of the effects are solid enough and rather well done. It with the world building mentioned earlier was pretty immersive and kept me interested when other elements were drawing me out.  Others…just a few grades up from SyFy movie of the week. On par with some of the earlier films mentioned, such as Priest or Dracula Untold. At an editors view it takes too long on some shots and not nearly long enough on others. Amateur tip: We know you are in New York. You made that clear. We do not need long aerial shots of people driving across any of the bridges. That was a few seconds that could have gone elsewhere, like not doing a clear pick up shot on a backlot that doesn’t match the rest of the location you are supposed to be at.

Despite the overall blandness, it is a bit of fun. I did actually enjoy it. Part of that enjoyment was hearing a line of “he’s a 14th level warlock” (only throwaway line I picked up on) and imagining this movie in the same world as other movies I’ve enjoyed. Part of it was the concept of the film, even if it wasn’t executed well. It was just appealing. The audience I was with did seem to enjoy it as they were giving their one liners to the person polling them, “awesome”, “exciting”, “kick ass”.

The movie reminds me of watching a group of people give it their all and turn out something mediocre. You appreciate the intent even if the final product isn’t all that good. It reminded me of other things and those things brought a smile to my face; and that’s worth something.

Shortest version: It’s fun, but unless you really want to support it wait til Blu Ray.