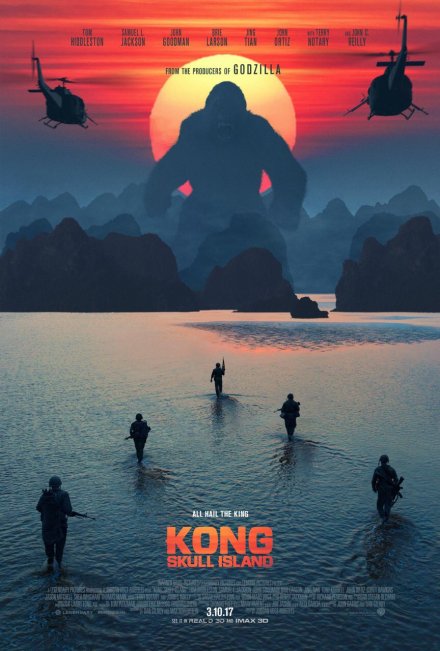 I had two movie experiences tonight. Sword Art Online: Ordinal Scale and Kong: Skull Island. These experiences were diametrically opposed with SAO being with friends and an audience who was clapping, laughing, crying with the beats of the movie. I haven’t seen an audience as passionate about a film and reacting so strongly in many many years. I was among those feeling with the movie and cried quietly after my friends had to head home.

It’s been a long time since I remember seeing a movie that made me feel like that and with friends and fans who were as engaged. I miss it and I cherish tonight’s experience.

Then there is Skull Island. There were maybe 15 people in the theatre, but two men behind me who may or may not have snuck in, were quite obnoxious and very very drunk. Kept calling me bro. As I was not in the mood to be assaulted tonight I said nothing. Do I think it may cloud my review of the movie? Perhaps.

The real question is should Kong have stayed on the island?

First, let me make one thing very clear, this *is* in fact tied to the same universe as 2014 Godzilla movie. The studio in it’s…vain… attempt to mirror the success of the Marvel Cinematic Universe (MCU) is trying to create one with it’s own properties (or Toho’s I guess?). This isn’t a spoiler as it actually has no bearing on the film, but the company Monarch from the first one is present here and it is no accident. There will be a roll over spoiler at the bottom though for those who want it.

The story credit goes to John Gatins (Flight, Real Steel, Need for Speed and Power Rangers later this month). Suffice to say his style of story is all over the place in his work history as much as it is in the movie. Though his story was adapted to screenplay by Derek Connolly (Safety Not Guaranteed, Jurassic World), Max Borenstein (Godzilla 2014), and Dan Gilroy (Nightcrawler, Real Steel, Bourne Legacy). The people behind the pen and on the paper of this movie have left me a mixed bag of emotions as to how I feel about the work they produce individually and collectively – much like the movie. I feel that the people of the pen paid attention to the feedback from Godzilla being too slow, focusing too much on boring non dimensional characters, killing off your most interesting actor. I also believe that they overcompensated the other direction; but still never quite nailed the characters.

Just as I feared from the trailers the movie isn’t quite sure of the tone. It very obviously moved away from the sedate, dry, and washed out tones of Godzilla; but in it’s quest to be different didn’t stake a claim as to what it wanted to be. It knew it just HAD to be different than it’s predecessor so it tried everything! A bit of horror, bit of adventure, bit of action, bit of war, bit of comedy, and bit of Oh god look at the size of that thing – and little of it worked. I may have to send their agent a small booklet on the word subtlety and how to write  a script with it. None of the characters are particularly compelling and you spend the time wondering when most of them will be picked off by the denizens of the island. The amount of stupidity shown as nearly as big as Kong himself; while the broad strokes used to paint the near caricatures of human beings is wide enough to paint the deck of an aircraft carrier. You just won’t care, and the only reason you might is the raw charm of a handful of the actors.

Oh the actors. Hiddleston is doing his best to be the adventure movie lead despite the flaws in the script, directing, and just the movie itself. He tries and I care simply because he is Tom Hiddleston. Samuel L Jackson phones in a performance of Colonel Kurtz, I mean Preston Packard. Brie Larson does little, but tried to do more than look pretty. Not her fault either. More on that in a bit. John C Reilly is absolutely fine. He was not in full comedy mode, in fact he’s a touch tragic but due to the script and directing you don’t get that 100%.  There isn’t much else to mention here; which means I can begin the ritual execution.

What. Was. Jordan Vogt-Roberts. Thinking? Also what was the studio thinking? They want this to be a tentpole level feature that can help continue to drive interest in their plan for a Giant Monster Cinematic Universe, so lets hire the guy who did a few episodes of Funny or Die and some other comedy work. The direction in this movie is nearly as bad as the editing. I can think of nothing good to say here. The contrivances were god awful while the shot choices laughable in their forced attempt to be ‘epic’.  The pacing is all over the place, the characters have hints of being more and are flatter than the ground under a giant gorilla’s foot.

What does work are the visuals. Kong is amazing. The creatures are…ok, but Kong is amazing. There are fights with him, more than Godzilla offered and far more clear than the previous film. That is one of the movies few credits in which the fighting of Kong vs Monsters is very clear and easy to understand. I think they used music when they couldn’t figure out how to test the speakers or the dialogue may have been even worse.

It’s not good. I am away from the experience and the movie just isn’t good. The visuals are good and they waste no time on the reveal of the big guy. So thats the positive column. It does try, and mostly succeed at giving us a King Kong story we haven’t seen before, but that isn’t much praise. The money shots of him standing and his size are there and worth it, but they do not carry a film.

Thats all I can say – I really believe it’s bad.

If you are a Kong fan? Sure. Otherwise see Logan again or save the money.

What if I really must see it? I mean Hiddleston.

If you must, the 3D does add something. Mostly digital embers, but the depth of field is nice and the XD speakers were amazing in more than a few shots.

Are you sure the jerks that were behind you didn’t sway your opinion?

Yeah pretty sure. Its why i still write these vs impromptu videos.  It gives me time away to think. Honestly, the review is kinder than I thought it would be.

Honestly. No, not really. Sure the big guy should be the focus, but the movie is just badly done.

Next week is Beauty and the Beast and The Belko Experiment, but I will be traveling for work so may not get to see B&B before Friday.

Ok if you do see it stay for the end credits. I noticed it said “Rodan”, “Mothra”, “King Ghidorah”  are trademarks of Toho. Then we get an end credit scene where they absolutely set up King of the Monsters.