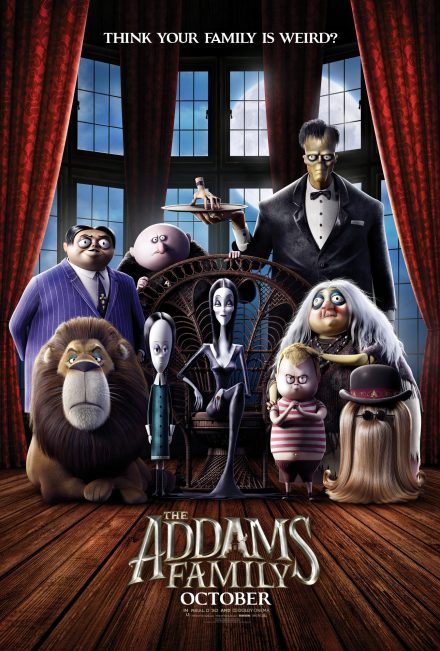 The family I wish I had when I was a little girl. Yes, I was always this way. I think I may have watched every episode of the series even in color, and the cartoon and of course the Scooby Doo appearance.  I’ve covered both Addams Family (1991) and Addams Family Values (1993) movies in the past (almost 5 years to the day) and have not changed my opinions of them since. But we aren’t here to discuss those films, instead we are here to discuss the 2019 animated film based on the original comics and series. Some interesting trivia for you – the Addams family didn’t even have proper names from their first appearance in 1938 until the TV show in 1964.

Should this movie have gone without name too?

It makes me nervous to say the movie activates my three writers rule, with Erica Rivinoja (Cloudy with a Chance of Meatballs 2, Trolls) and Matt Lieberman (The Christmas Chronicles) on story, and screenplay by Lieberman and Pamela Pettler (9, Corpse Bride). They hit the mark and they didn’t on the story. Like it was amazing to see them go back to the basics and get 1964 style of the characters; while embracing some of the single frame comic panels feel as well; however, they missed on some of the parts that people love about the family. It’s like hitting a 20 on a dart board instead of the bulls-eye though, you got a good score but were just off the best mark. The story trudges through familiar territory for a family comedy drama, with teenage rebellion, the weight of family expectations, and the decisions to protect our children or let them grow. It’s fine I suppose, but doesn’t feel quite the same as the family the adults bringing their kids to this remember from the 90s or what I remember from the syndication of the 60’s show. Again it isn’t bad, it’s just not right like an ill fitting skin, er shirt. What?

The performances more than cover up the gaps with a power cast that is 100% a dream casting. Oscar Isaac (Star Wars, Ex Machina) as Gomez, Charlize Theron (Atomic Blonde, Mad Max Fury Road) dropping timbre like a lumberjack (say it out loud) for the always elegant Morticia. Personal favourite actress Chloë Grace Moretz (Let Me In) as fan favourite Wednesday, breakout star Finn Wolfhard (It, Stranger Things) as Pugsley, Nick Kroll ( Secret Life of Pets 2) as Fester, and Bette friggin Midler as Grandma. Woof. It’s perfect. They nail it. I love them all – even Fester. Thanks to the 90’s movies Wednesday gets about a solid third of the movie to herself, and thanks to the original series the writers remembered Pugsley exists so he can get a driving plot. We also get solid and fun performances from Allison Janney (I Tonya, The West Wing) and Elsie Fisher (Eighth Grade) as Margaux and Parker Needler. I have absolutely no complaint in any of the voice acting or performances. Everything and everyone was 100% on point without a single missed delivery.

Now, let us discuss the directorial and animation choices by Conrad Vernon (Monsters vs Aliens, Shrek 2) and Greg Tiernan (God of War and like all of Thomas the Tank Engine). While I didn’t agree with all of the choices made in the story, they made their choices and stuck to it. There are themes in the movie that they lean so far into they could have fallen over if they weren’t careful – but they were. They blatantly telegraph their opinions on certain matters in a way that makes me giggle. Among the choices is their target – young kids. This movie runs quick at 86 minutes with credits and it feels it. The movie is actually a bit too brisk and there were missed opportunities for dialogue between family members that could and likely should have been in the movie that would have added a few minutes but only barely broken the hour and a half mark to put in. It could have made some of the failings of the movie less impactful and instead turned some of them into absolute hits.

Then there is the animation 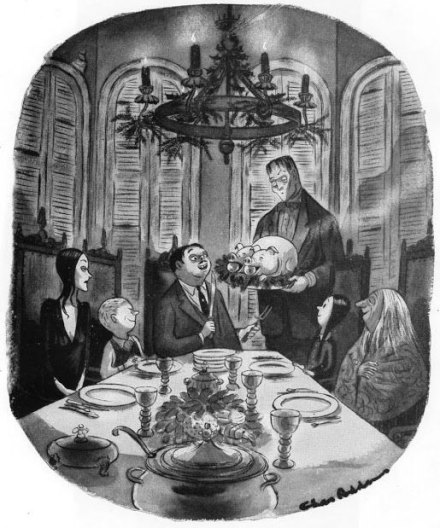 They went back to the comics. They embraced it. They didn’t flinch and I love them all for it. When I say embraced I mean as I was doing my research for this review I found some scenes from the movie that are absolutely inspired by some of the single pane comics. There are some other great fan service moments that run through the film that will please those who remember like me, and simply amuse those who are only seeing things for the first time.

I’d love to tell you that this movie is an absolute must. Stop reading and go. I couldn’t do that in good conscience. It’s absolutely cute, endearing, and simplistic but I saw that in Abominable a few weeks ago. It again *IS* cute, endearing, and charming but I think I wanted more. I don’t think I realized just how young the target audience was for this based on the trailers and the 90’s movies left a pretty significant bar that it shouldn’t have to hurdle, but by virtue of human psychology does.

The Addams Family is an all together ookey movie that was a great way to introduce a new generation of children to one of the greatest, sweetest, and most loving families to ever hit comics or TV. It certainly won’t be for everyone who loved the 90’s movies and that’s OK too. I don’t agree with every choice that was made here, but I admire that they made a choice and didn’t go middle of the road or safe on some of the elements and symbolism through the movie.

I have no regerts. So yes. Yes I would.

So you’d be buying it then?

Without even a second thought.

Ok but are you being too kind to it because its your aesthetic?

Maybe, but what I can say is we had a half filled theatre on a Thursday evening, most of whom were kids between 4 and 10. When the Addams Family theme kicks in for the credits hearing a row of children snap, clap, and sing a long tells me everything I need to know about the movie and if it delivered.

There’s enough for the adults in the audience, but this one is for the kids and they ate it up. Even the kids who were a bit noisy in the movie were noisy WITH the movie and getting excited because of it, not despite it.

That’s saying something and it’s something worth listening to.