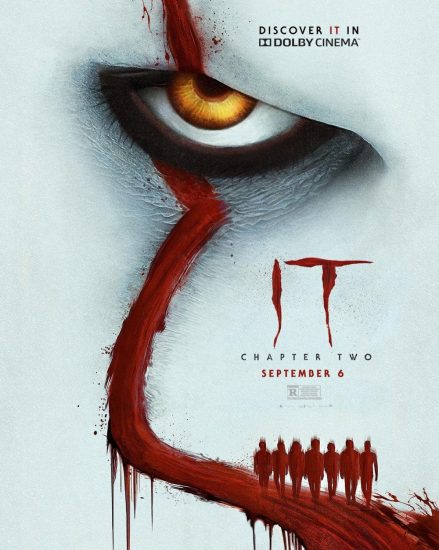 It’s no secret how much I loved IT 2017 as that review attests. I didn’t go back and read the book to see what was different and a thousand people did their videos on what was different between that movie, the mini series, and the book. Even now as I write this I know there are a thousand people writing their scripts for the differences between the book and the movie. As I mentioned in the original review, I don’t care. This review won’t compare the original series or the book as all three are different styles of creation which would be unfair to compare against one another. King can spend a hundred words or more for a single description, both series and movie can do it with a single frame, held for two seconds. King has the luxury to explore the depths of psyche and depravity in a way that no Made for Network TV could conceive of, especially in the wake of the 80s and early 90s. Even now such material would be found on streaming content, cable, or premium cable to really go there. So thus book and mini series cannot truly and fairly be considered rivals, just as the mini series is a product of its time and capabilities this movie is a product of its and needs to be judged appropriately.

Does it continue the story of IT Chapter 1? Are questions answered? Are the required plot beats hit from the original material to progress the story? Is it scary? Is it visually interesting? Do the actors feel like they are the grown up versions of the children they had been? Does the ending feel like a good conclusion?

Or…should IT have not come back?

Certain credits remain in place, which might seem obvious considering the $700 million global haul it took on a $35 million budget, but Hollywood does stupid things all the time. Look at Dark Phoenix bringing back the writer of the most maligned X-men movie to write…the same movie. Gary Dauberman comes back as the writer to finish out the story, with a brief stint putting out the Nun, Swamp Thing for DC, and Annabelle comes Home in the meanwhile. Thanks to maintaining that same writer, the movie has a consistency with the 2017 release that keeps the flow going, and with it being an adaptation much of the material is there. Dauberman has perhaps one of the more unenviable tasks in this production as he has to adapt the unadaptable with some significant deep lore from the book that the series couldn’t touch and he has to decide what if anything to keep from that lore. I don’t disagree with most of his decisions. Point in fact some decisions made are so well done they almost make me overlook some of the flaws in that script (possibly editing, hard to tell). Which does mean there are flaws. The movie needs a few trigger warnings and while…thematically accurate I am not sure it was needed or could have been altered to not be as rough. I will discuss more on that in the TL;DR section. Some of the jokes could have been toned back or removed and left only for the villains to tell; mostly weight based ones for the record. I’m also not 100% on a beat from the end, but I will let it ride for now. Overall the screenplay does everything it needs to and shines where it must.

Which brings us to director Andy Muschietti, who has done nothing between the movies which is probably a good thing for the man directing this. He makes plenty of brilliant choices here and absolutely nails drawing the performances from the cast; but the flaws that might be in Daubermans script or in the editing must land on him. You can’t make certain references to objects, places, or phrases if you never set them up successfully. The movies near three hour running time does as well. There are at least two full scenes which could be struck from the movie and it wouldn’t have an effect on the overall plot for all that they did. While they may be canonical and something folks would like, it added nothing with some of the changes made to accommodate them. The trick to superior editing is removing a scene and if it doesn’t change the flow or narrative in any significant or character driven/growth way then it could be cut. It may seem I am being harsh on him, but I am really pleased with the overall product, but the parts that detract fall on him.

What doesn’t detract is the acting.

McAvoy and Chastain are well known and more than capable of playing the adult versions of Bill and Bev and they nail it. Bev is missing something I think, but that might be screenplay or editing failing not Chastain. This also marks their third appearance together in a movie as near as I can tell. Jay Ryan is hard to tear your eyes away from as the adult Ben Hanscom, meanwhile James Ransone (Sinister) brings it as an adult Eddie Kaspbrak. Andy Bean (Swamp Thing) nails the adult performance of Stanley Uris ridiculously well, you feel like you are really looking as if he grew up and looked the same just taller. Isiah Mustafa (Shadowhunters) gets the Mike Hanlon as an adult and brings all the desperation and depth he needs to bring everyone back to Derry after 27 years. All of them are good, if not great, they brought their A games and no one phoned it in in the slightest, but we need to talk about Bill Hader (SNL, Superbad). His Richie, his performance is absolutely next level. Some might say he wasn’t particularly funny and I would say they missed the point because those jokes were meant to fall flat. This mans acting is just through the roof and continues to bring the film back together in a way that makes the stakes seem so real for these adults. The same comes for the kids who are back to reprise their own roles for different angles on scenes we know and scenes we never saw, Jack Dylan Grazer (Eddie), Sophia Lillis (Bev), Jeremy Ray Taylor (Ben), and Finn Wolfhard (Ritchie) get the most shining moments with Wolfhard getting an absolutely powerful scene that will surely be overlooked by most.

This is where Muschietti shines everyone. These performances require actors who are above the par, but it also requires a director who knows all of his stuff to get the performances I saw. Now I didn’t mention Skarsgard in th acting section relegating him to the technicals, but this isn’t his story this is theirs. He’s there. He does his thing. He is legitimately scary at times, but Chapter Two is all about the kids, the adults, trauma, and coming home again. While most of the work around Pennywise this time is good, some of the forms and threats just don’t look as clean as they could and another pass, another rendering effort could have taken them a step in the right direction towards ideal completeness. Of course, that doesn’t stop this movie from having raw nightmare fuel left, right, and center that was generated in a computer. There’s enough to keep some folks up at night that doesn’t involve clowns trust me.

It: Chapter Two does everything it set out to do. It completes and concludes the story of The Losers Club and Pennywise the dancing clown. There are laughs to be had, there are jumps, and there are tears. There is real and imagined horror through this movie from the opening scene to the bruises on adult Bev’s arm that never go away during the length of the film. Growing up in a small town not too dissimilar from Derry, I can see coming back to town and walking through it to see what changed and what hasn’t and sometimes that’s terrifying in its own right.  Facing your past can be its own fear and making your own future as well. The movie is able to successfully hit all of these beats, plus never ceases to have a level of tension and did I just see that moments through it.

Knowing that Dauberman and Muschietti deviated from both the book and the original mini-series adds its own level of tension. If you know either of those incarnations you know things that will happen, but as proven they are willing to change things. So when the title credits begin with a WB logo surrounded by the deadlights, you can’t be sure *how* they will interpret scenes. What will their take on the Chinese Restaurant look like? The library? The final form? Who lives, who dies? It’s all up in the air and that is a magic all its own.

Yes. Absolutely Yes. Why aren’t you watching it yet? Go home. Watch it.

That said…I need to dip into spoiler(ish) territory out of respect for all of my readers needs for some potentially unexpected triggers.

Would you watch it again?

You’re going to buy it aren’t you?

I am curious to what the box set will look like on my shelf. Yes.

Is it as scary as the first?

Hmm I don’t think so. Sorry to say, part of the fear of the first is the initial shock value of what they did and the kids in peril. This focus on the adults and us knowing Pennywise, does take away some of the terror. That’s more or less like Alien vs Aliens. You will never be as afraid of the Xenomorph as you were in the original, but it doesn’t mean it doesn’t have it’s own level of terror.

It does run a bit long and hits a Return of the King type ending sequence, but beyond all of that this will be and should be a very well received film in my opinion. I do think that Mike isn’t treated particularly well by the script or the film and there’s some opportunity there; some of the CG could be cleaned up – but again this is about as good as you can do with the amount of material needing to be adapted.

Also three of the cast (McAvoy, Chastain, and Hader) were in Disappearance of Elanor Rigby together…the hell?