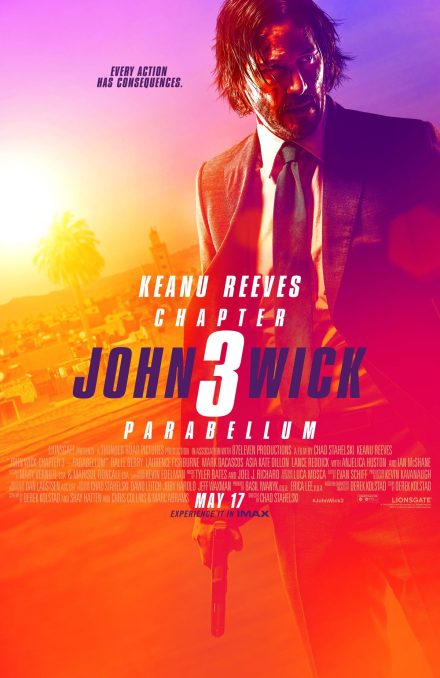 Si vis pacem, para bellum. I actually have this on a whiteboard at my job. The Latin phrase translates basically to “If you want peace, prepare for war”; thus the title being Prepare for War. John Wick is one of those movies that kinda snuck in the backdoor back in 2014 with no one giving it much attention at the initial release. It came in second to Ouija by over $5 million, alright? It barely did better than a Brad Pitt movie (Fury) in it’s second week and Gone Girl in its 4th week and that had already made over $100 at that point. So yeah it’s safe to say John Wick was not exactly a popular film on it’s release weekend. It did however double its $20 million budget, but was pretty much gone in four weeks. It found life however in the after market and people realized what they were missing (but you know if more people read my reviews they would know to go see it!).   Two and a half years later John Wick: Chapter 2 doubled the domestic gross of it’s predecessor with $92 million; but also doubled the budget. $15 million more was thrown at the third chapter.

Did they prepare for war though?

The story was written by the original writer, Derek Kolstad, who literally just makes assassin projects, with his next two being a TV series for The Continental and Hitman. The screenplay then gets three additional writers, thus violating the writing rule of Darke. Marc Abrams (The Bernie Mac Show), Chris Collins (Sons of Anarchy, The Wire), and Shay Hatten in their first major writing project. I have to admit confusion here as one of the driving forces of a John Wick movie have been relatively simplistic plots that rely on a minimum of dialogue. This one is not that different in that regard. Kolstad was the sole story/screenplay credit on the last two so I cannot fathom what the others brought to the work.

The story is as simple as what’s on the tin and picks up where the last left off more or less. John having killed someone within the Continental has been declared Excommunicado by the surprisingly large network of assassins and support staff. He loses all rights to services and is now himself the hunted. What will he do? Where will he go?

That’s it. Even as we get a deeper look at the world of killers beneath the surface of our own, which is a lovely conceit still, there is a simplicity to it all. They do of course add layers and some complexity as we visit new locations and meet new personalities, but all of that is handled well by Stunt Performer turned director Chad Stahelski. As with the first two films having someone with his kind of experience in knowing what it takes to make a good shot for the camera (and guns) lets us really enjoy the kineticism of the fight sequences. Again this is no different, except now we have added animals to the stunts using horses and dogs – which anyone can tell you adds even more risk. You don’t want the animal getting hurt, the animal has to be trained, and you have to be careful the animal doesn’t hurt any of the performers when it’s all in camera like this. I am pleased to say the addition of the animals definitely added to the action.

We can talk about performances, but we are dealing with Keanu Reeves in the role that revitalized his career and the action movie industry. He gets to spend most of the time just being tired, broken, and still the Baba Yaga we know and love.  Ian McShane (please narrate my life) and Lance Reddick return as Winston and Charon of the Continental, with Laurence Fishburne also coming back to work with his friends from the Matrix.  Two of the new stand outs are of course Angelica Houston as The Director and Halle Berry reminding us she exists and has action chops. Asia Kate Dillon (Orange is the New Black, Billions) gives us to my knowledge our first Non-binary actor (pronouns are They/Them) with a major role in a major Hollywood production. They do exude a helluva presence on screen and I am interested to see them in more projects. A special call out to Yayan Ruhian (The Raid, The Raid 2) and Cecep Arif Rahman (The Raid 2) for one of the more memorable fight sequences and showing just how scary Silat can be as a martial art. The show stealer, that isn’t four legged, is absolutely Mark Dacascos (The Chairman of Iron Chef America, Brotherhood of the Wolf), who just is a joy to watch and clearly was having the time of his life as our John Wick antithesis for the film.

John Wick is back. They were prepared. 11/10 would go into battle with the dogs from this movie. The movie runs a bit long at 2 hours and 10 minutes and at times feels it, it still turns out a solid bit of entertainment. Yes, this is still a world turned to eleven and no you cannot possibly be expected to take it seriously. That isn’t the point here. The point is to enjoy 2 hours and 10 minutes of Keanu Reeves moving from action set piece to action set piece and wondering how they will continue to ratchet it up as the movie goes on. For that it succeeds dramatically. I am confused by the number of writers still, but I got what I wanted from the movie and could still see every action piece and every stunt.

My only glaring flaw is that the first one shone for the raw amount of practical. As the stunts ratchet, they did hit some of the CG and compositing a bit harder than I like and my eyes were easily able to pick out more than a few. Granted safety first, but if it’s going to have to be that digital, look for a different stunt.

Officially the answer is yes, but the likelihood of it happening is low.

Absolutely. No regrets on that front.

Are the dogs adorable?

They are the bestest boys. Would pet. Would also likely lose a hand.

Wrapping up I had two new Dark Princesses tonight with me and I enjoyed the movie and it was very cathartic after a rough week. It’s that kind of movie and I am glad for it.

Next week: Brightburn and Aladdin. I am honestly not sure which I will see first.

WAIT! before you go – what’s a Dark Princess?

My original two Dark Princesses might get special titles, I haven’t decided yet.

Welcome to the Continental.