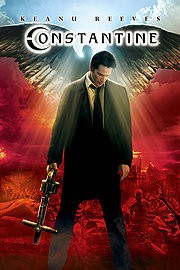 So it is fortuitous that this review was requested. I had been wondering what I would review for todays post and this works out perfectly as the TV series just premiered friday as well. I am going on record saying when I first heard of this film – I refused to see it. Absolutely, Selene as my witness refused to even consider seeing this film due to the casting of Keanu Reeves as the titular character. I was a minor fan of the comic book character having enjoyed him in The Books of Magic and various other appearances with DC/Vertigo characters I knew and loved. I knew certain things of him were absolute.

Of Keanu’s things he can do in a film to portray the character, chain smoke. He technically could be bisexual, but the film didn’t address it. We saw the british accent once…yeah and it was laughable. This was one of the worst possible castings I have ever come across. I was resolute in my not seeing of this film until I was one day – almost literally – tied down and forced to watch it on DVD.

So how does it do once I take off the glasses of raw seething hatred?

Let’s take a poke at the director a moment. This was his first feature film. He had just come from being a music video director and went right into this. Since then he has given us I Am Legend (I’ll review that some other time when I am feeling the need to cut myself and do that instead), Water for Elephants ( I have no comment on this, I haven’t seen it), and The Hunger Games Catching Fire. Ok, so its clear he has evolved, but did he do a bad job here? Honestly – no. He does a good job of getting performances out of his actors and controls the shot in rather inspiring ways at times. He lets angles distort our perceptions and appropriately uses colour and the visual effects to maximum effect.  There are a lot of good decisions here that show serious potential and I can see how he eventually directed Hunger Games. I can also sense a lot of studio interference.

When we talk about story we have characters created by Jamie Delano and Garth Ennis for the original comic and a story by Kevin Brodbin for this. Brodbin never got much work. He did the 1996 Seagal movie the Glimmer Man, this, and the woefully underrated Mindhunters in 2004. He took a stab at the screenplay and an additional writer was brought in to fix it up if I had to guess based on the second credit of Frank Cappello.  I can’t imagine why he was brought in having really only done Suburban Commando before. Yet by their writing powers combined they actually nailed the essence of Constantine and the hidden world within our own. The movie probably has one of the best representations of a world within a world that normal people don’t or can’t see. I could watch this, The Craft, and Mortal Instruments and they almost fit seamlessly.

Ok, now this is where we usually talk about cast. I will get to Keanu last. We have a young Shia LaBeouf, mostly being Shia, but not entirely terribad. Moving on. Djimon Hounsou plays Papa Midnite, a noted character in the Vertigo verse and he nails it with all of his usual charm and screen presence. He has weight and lets it go full throttle for this film. Rachel Weisz (The Mummy) is our catalyst as a LA Cop with a british accent, possibly adding to my fury at Keanu, since they were able to obviously get someone from the UK into the film. While some of these cast members are interesting and do their best, nothing really compares to these two: Tilda Swinton and Peter Stormare. Swinton (Narnia, Snowpiercer, Only Lovers Left Alive) is Gabriel, the archangel. She uses her vaguely androgynous looks to maximum effect and is both beautiful and offputting as an angel might be. She has some of the best dialogue in the film and devours scenery like someone coming off of a fasting. Peter Stormare as Lucifer? One of *the* best performances of this character I have ever seen. Talk about scenery chewing, nothing compares to this, nothing in this film anyway. Overall, he is up there against Viggo Mortensen in the Prophecy for raw creepy pasta levels.

The visual effects in the film are remarkable strong for 2005 as well. Only one real effect is an absolute fail with the bug guy on Figueroa, aside from that there is a definite elegance on how they choose to evoke effects. The fire looks good from the Dragons Breath. The wings of demons flying by windows look good. The make up effects are *really* good, but of course they came from Stan Winston Studios and had bloody Ve “Face Off” Neill as make up department head. Even their vision of hell and the demons is not something I’ve quite seen before. Even the flying tracking shots, while a mix of cg and real work fairly well.

Now on to Keanu. Whew. I didn’t hate it. There I said it. I Didn’t hate it. While he still lacks most of Constantines charm and wit I blame that on script as much as acting. He still isn’t John Constantine, but he is the american cousin if he had one. He gets the sarcasm, the nihilism, and the chain smoking down. He gets people around him, friends, dying as par for the course, but the reality is he isn’t a bad Constantine. He isn’t great, but I will admit he got as close as the script, the studio, and his talent could allow. That of course is the downside, he isn’t great and was limited by his talent. Keanu is not charming. He doesn’t really have much in the way of charisma, even in John Wick he isn’t charismatic or charming but fun. Here we are missing some of the fun, and all of the charm.

From a purely comic book loyalty standpoint, they got a good Constantine story here. It fits, but they fubar’d the casting so badly that it was nearly unwatchable by the fanbase that could have supported the movie. If you take off those fandom goggles and just watch the film as an adaptation of John Constantine Hellblazer, then …and only then you might enjoy the film.

It is a better film than most give it credit for and Keanu is its greatest strength and weakness. He does pretty damn well for the role, but misses it just enough that it doesnt work. I do think people should give it a shot, but for the love of all that is holy in your life do not compare it to the source material. Consider it instead a Supernatural Mystery with Religious overtones.

So do I regret not seeing it in theatres? No. I think I would have hated it out of hand and never given it a shot for a decent review, coming back later I think I can be honest in saying Constantine: Not too bad actually. 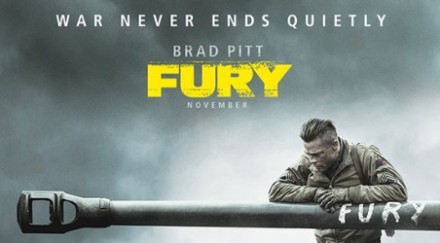 Ok, I did want to see Book of Life again, but was at least curious on this one. It was also a friends going away party and he wanted to see this, so my responsibilities as a reviewer and a friend aligned for a change of pace. This one almost – almost – got the tag trailer fail on it. The trailer promised me Band of Brothers in a Tank with a semi decent amount of action and what looked to be a potential romantic subplot somewhere. It was close enough in many respects that it doesn’t fail as hard as others have in the past.

Yes, but if the trailer sold it, should I still see it.

Well that’s a good question to ask. The film was written,produced, and directed by David Ayer. Ayer directed the gritty cop drama with Michael Peña End of Watch and the recent Governator bomb Sabotage. His writing includes, U-571, Fast and the Furious (the first one), Training Day, and Dark Blue The man knows gritty. DC should hire him if they want to keep their track record of gritty, visceral, humourless films. He seems to be particularly good at them, point in fact, he seems to have refined it to an art form by now.  He is unforgiving in his story and characterizations, to the point I was ready to walk out twice during the film. Thats right walk out. Two scenes were so uncomfortable to watch I debated leaving. They weren’t particularly graphic in any way but the psychological violence in them was just over the edge for me. They were flat out disturbing and in many respects somewhat depressing.

Now as much as I hated seeing those screens, they represent a keen awareness of history and behavior during the invasion of Germany towards the end of World War II. I have seen Kelly’s Heroes and the Battle of the Bulge. They were products of their times and had rose coloured glasses on when it came to the Americans liberating and winning during their involvement in the war. Both were excellent and entertaining films, don’t get me wrong, but they didn’t quite capture the horror of war. It’s not what was wanted or needed then. Modern audiences want that realism. They want that dark edge. Congratulations you have it. You have two scenes of strongly implied, but not shown, rape. You have psychological torture and the breaking down of a very green soldier. You have any number of major extremities being removed by large calibre fire. You have the horror of war for just over two hours. Nothing in this film makes it seem glorious or glamourous. It is an unforgiving hell. One specifically designed to strip you of any ideals or humanity. Few punches are pulled.

The acting, I have to give a wow here. Brad Pitt shows how solid an actor he is and that he can control himself and bottle it all in, with most of the strongest elements of his performance from body language.  Jon Bernthal (Walking Dead) takes a huge departure from his previous work and gives an equally visceral performance. Michael Peña continues to impress and I hope continues to do a wide range of films. Logan “Percy Jackson” Lerman showed an improved range over his previous works. The most standout performance goes to the much maligned Shia Lebeouf. I don’t like him on personal and professional grounds. He was nearly unrecognizable in this role due to good acting.

Honestly this film screams Oscar Bait. The acting was excellent, the sets, the production design, all of it was designed to be Oscar worthy.

It sounds like I really liked the film with all the praise above. This is the difference between professional and emotional attachment to a work. Artistically the movie is a well made war movie in nearly every aspect, but from an an entertainment value – It kinda failed. I really did not enjoy my time watching it

It wan’t that it was boring, but because it verged on too uncomfortable.

So the final verdict:

If you love war movies. Go see this

If you are a completist for any actor mentioned- go see this.

If you don’t like war films at all – avoid it at all costs.

Otherwise – give this one a pass. It’s so good. So real , it stopped being entertaining and was just …off.