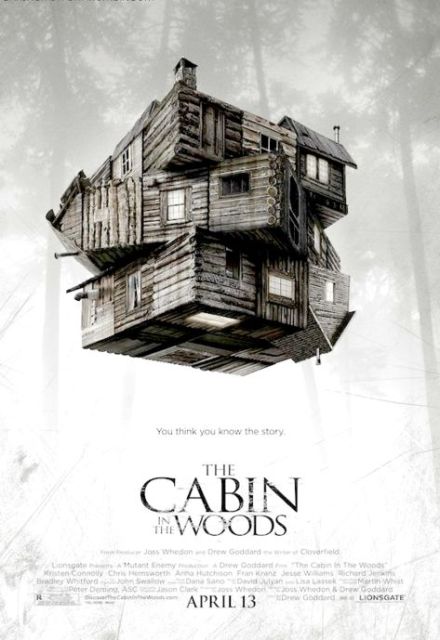 Another from the request vault for this month. Has it really been three years since this came out? I kind of wish I had seen this one in the theatres, but sadly I didn’t. Overall most modern horror disappoints me, even Joss Whedon’s name on it and the fan reaction to the film. There are few names that will put my butt in a seat in the movies on name alone, Joss is not one of those names. He does so much well, but there are flaws that are getting harder to overlook. All of that being said the question remains:

Should you visit the Cabin in the Woods?

Let’s look at the writers first. Joss Whedon, generally referred to as a geek god, self proclaimed feminist, creator of Buffy, Dollhouse, Firefly, and of course director of Avengers. In addition we have Drew Goddard, who also directs, best known for Cloverfield and recently, The Martian. It’s clear from the filmography that the two men are friends and what the movie makes clear is that they work well together and have an ability to share a vision.

The story, interestingly to me, is both a solid horror film in it’s own right while bordering on parody of the genre as well. It is a near perfect deconstruction of the teen horror genre that quite brilliantly subverts it at the same time. The idea that much of what you see in films for the past forty or fifty years is a test that most fail, save The Final Girl. That every archetype is typically represented in these films, the jock, the scholar, the slut, the virgin, and the fool. Sincerely yours, the Breakfast club.

Each role is taken seriously, and it’s important to note none are shamed. Point in fact the antagonists craft the people to their role where it may not have existed before. I would commend the acting but when you are literally playing an archetype it is difficult to stray. This isn’t to say that Kristen Connolly (Zoo, The Happening), Chris Hemsworth (Thor), Anna Hutchinson (Power Rangers 2008), Jesse Williams (Grey’s Anatomy), and Fran Kranz (Dollhouse) don’t do well as our protagonists; it’s just they don’t have to do much. Kranz actually has the most work as the stoner who plays every movie audience ever. He is the audience voice in the film and nearly every line is something we have thought or said watching movies such as this.

Let’s talk effects for a moment. The movies does a lot of work practically.  If you are tired of hearing this, sorry not sorry. Practical always looks better. A good make up effect enhanced lightly by computers works, but the underlying practical make up and prosthetic will always win in my mind until the day I can no longer tell I am looking at a computer enhanced image. I absolutely adore the creature designs that I saw through the film. So lots of kudos to the art department, make up department, prosthetic, and wigs at AFX. When the movies does have to go into the realm of CG it isn’t the greatest 100% of the time, but overall is really solid. The imaginations of the artists were allowed to go full bore and we should thank them all for it.

If you have not seen Cabin in the Wood by now and are a lover of the horror genre – see it! Honestly, most audiences can take it as it doesn’t tend to go full bore gorefest too much or show too much when it goes into that realm. Part of the easing of that is Whedon’s need to insert humor and sarcasm into particularly tense scenes and serious moments into the moments of levity.

While I would still not let children see it (I would have), teens and higher could absolutely watch it. There are some really great concepts here and a near paint by numbers format that could help people who want to write stories or scripts to take notes from.

I don’t know about you, but I am for another trip to the Cabin. I mean after all what harm can come from reading a book.

Ah 1992 how I look back on you as one of, if not the favorite summer of my life. Lifeguarding at a pool surrounded by cuties, A League of Their Own, Bram Stokers Dracula, and a movie with a ridiculous title but that I was required to see by an unwritten law of the undead – Buffy The Vampire Slayer.

Written by a man whom at the time no one knew, some guy called Joss Whedon (heard of him since then?) who had this concept of mixing horror with a level of self aware ridiculousness and a storyline at the time we had never seen before. He sold his idea to the studio 20th Century Fox, who bared their teeth and showed him just what kind of damage they are willing to do to his ideas in the years to come.

Fran Rubel Kuzui (director and producer), who still has film rights to the name, concept and characters treated the introductory work the way Vlad Tepes treated his dinner guests. Turned this intresting concept into raw camp and borderline schlock with no love for the writers intent, vampires, movies, or actors.

Let us add to the butchering a well known actor who refused to concede on anything and to this day Whedon dislikes by the name of Donald Sutherland. We will fill our movie out with Paul “Pee Wee Herman” Rubens, Rutger “I’m here for a paycheck” Hauer, Luke “90210” Perry, Hilary Swank in her first movie role, David “Scream” Arquette, and Kristy “I’ve done nothing you know since” Swanson. Let me also include Thomas “Punisher” Jane (in his first movie), an uncredited Ben Affleck, Ricki Lake, and Seth Green Stir it together in celluloid for 92 minutes and you have a beautiful mess that somehow ended up being as entertaining as it was horrible.

The effects are sufficient for the time especially when you consider the ridiculousness the studio went for over the semi-serious tone that was intended. Make up wise it is oddly better than average with some small attention to detail that might be overlooked. The look of the vampires were comical but at least they had fangs and drank blood.

While the final product was utterly ridiculous, it does have some beautiful gems of dialogue and moments where you can’t help but laugh as you’re rolling your eyes at it. Swanson actually despite everything shows more growth during the film than many movies can claim for their heroine. She has moments where her acting shines showing the vulnerability of a teenage girl faced with a completely strange world and how she deals with it. She captures a bit of the fear and incredulousness at her new situation along with her transition from vapid and shallow to the savior of the school and Slayer. There are plenty of subtle nuances in her performance and a delicate fatigue she brings as the movie progresses to it’s climax.

Thankfully, for vampire fans everywhere, five years later Joss Whedon once again gave the concept to Warner Bros who let him hold to his vision and gave us the Buffy TV series we all know and love.

So 21 years after release where does that leave us for TL;DR?

Buffy the Vampire Slayer the movie needs to be watched at least once. Embrace the ridiculousness and praise the Whedon that he was able to salvage the characters to become an amazing seven season show.

Buffy is and always will remain a guilty pleasure movie of mine, while not good, still highly entertaining with one liners I quote to this day.

Tomorrow’s review realized if it wasn’t fun – whats the point.