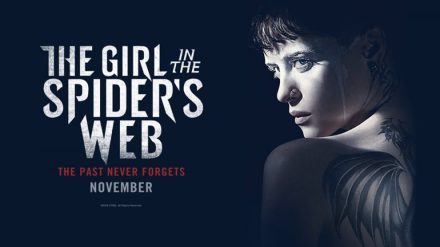 The past few weeks have been hell on my movie going timelines with vacation and a brief plague; in addition to a number of double or triple releases of films I want to see. This was a last minute viewing for me with no real plan or I would have invited my regular movie going partner with me, who I do owe a movie and a dinner for missing our last showing. Now, I am a fan of the Girl with the Dragon Tattoo in the original Swedish release (2009), not so much the American remake (2011) a few years later. Noomi Rapace defined the role of Lisbeth Salander, and the late Michael Nyqvist introduced me to investigative journalist Mikael Blomvist. While director Niels Arden Oplev may not be the auteur that David Fincher is, I found his (original) film more engaging. Rooney Mara was good, but she just didn’t hit what Rapace did for me in the role. Unfortunately, I have not gotten around to watching the two sequel films in the Millenium series, The Girl Who Played with Fire and the Girl Who Kicked the Hornets nest; but they are on my list. The movies require a certain frame of mind and preparation for solid investigation, mystery, and intensity that we don’t often get here in the states.

Tonight I was in that frame of mind and took a chance.

The characters were created by late activist and Swedish journalist Stieg Larsson (1954-2004), with whom even the original Millenium trilogy (Tattoo/Fire/Nest) was published posthumously, then converted to movies shortly after. This movie is based on the book of the same name, written by David Lagercrantz, who has another sequel in print The Girl Who Takes an Eye for an Eye. That’s a complex origin, but worth noting for future trivia contests if you so wish. Spiders Web was given the screenplay treatment by Jay Basu (Monsters: Dark Continent) with Steven Knight (Allied, Locke, Seventh Son); with on set touch ups by director Fede Alvarez.  As the director is the third writing credit here, my take is that he was doing rewrites on set with his cast. Alvarez worked on 2016’s Don’t Breathe and the acclaimed 2013 remake of Evil Dead.

The story here is a simple one as told in the trailer, Lisbeth Salander, righter of wrongs, is an avenging angel in Stockholm. She is a computer genius and particularly vindictive to those who victimize women – regardless of their social standing. Lisbeth is contacted to steal a scary software MacGuffin, is nearly killed, and must recover the MacGuffin before it’s too late with the help of some friends. She has an on again off again friendship with famous reporter Mikael Blomkvist, who returns in this movie as well. All of the events though tie to a past we have not seen fully explored for Ms Salander and it may come back to bite her in the end. Honestly, the story is Steal the Scary thing. Scary thing stolen from you. Steal it back that we’ve seen in so many spy thrillers and heist movies over the years. What makes this different is the personal touches and ties to the past and sense of self. Trying to identify who you are and remembering your past without letting it consume you.

The acting is fantastic. Claire Foy (The Crown, Unsane) gets the character. She has the rage, the insecurity, the fear, and the cunning of the titular character down. It’s difficult to make a character like Lisbeth sympathetic as she’s relatively anti social and unlikable, but if you have the chops and can pull of the complexity you can show the sensitivity and the need to reach out for human contact in a look, a touch, or even the slight tilt of the head and Foy has that. It isn’t a surprise she won awards for her work on The Crown, I’d personally like to see her nominated again here. Sverrir Gunnason takes over in the role of Mikael and he’s good, but he doesn’t have the edge to him I was feeling with Nyqvists performance. Lakeith Stanfield (Selma, Death Note) plays another party interested in our MacGuffin and brings a physicality to the movie that it might otherwise be missing, but the character doesn’t do him justice beyond that unfortunately. Sylvia Hoeks is our woman in red, and gives an as nuanced performance as she did as Luv in Blade Runner 2049 last year; which is difficult with the make up and prosthetics she has going on. Even with the minor roles and mediocre characters there’s a lot of subtext in the movie the various cast members have to deliver on and they do that effectively.

The on location (Stockholm) really adds the required atmosphere for the movie. The ice and snow (happy Elsa sigh) are as much characters in the movie at times and add a necessary element to the film. The camera work is both stable and kinetic in that you can see everything going on in every sequence, but there’s a motion to the camera for many of them that draws you into the chases and chess moves being laid out before you on screen.

I was excited watching this movie. It’s good. It’s entertaining from beginning to end. Ultimately it is also satisfying. More than once I found myself sitting up in the lounge seat and leaning forward or quietly cheering for whatever actually happened. In addition to this the movie provides multiple types of LGBT representation which is worth calling out.

I really enjoyed The Girl in the Spiders Web and I think you will too.

Should I see it then?

Yes. This one absolutely edges Widows out if you haven’t seen it yet. It’s just the more satisfying film.

No question in my mind. also at full price.

Yes. Also likely to get the other films, sight unseen.

Anything else to add?

I am going to try to see Suspiria this weekend at a local theatre if I can.