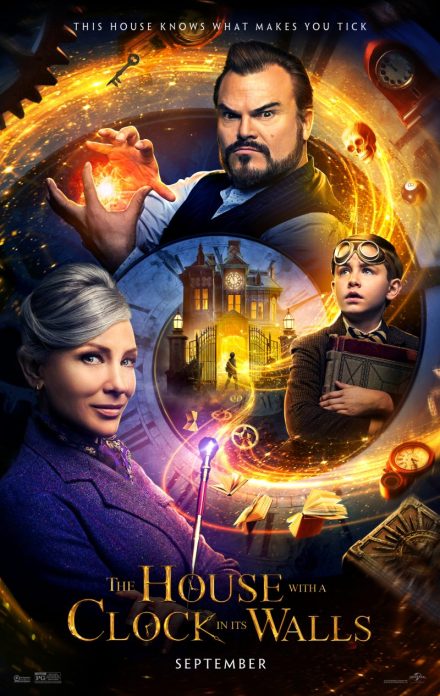 So aside from the animated variety you won’t get many movies from me that would be considered kids movies, but the trailer for this one grabbed me somehow. Honestly, I’d have to say it was Jack Blacks performance in those trailers and the atmosphere of the movie that got me. Then I looked into it, and of course its based on a book I haven’t read or even heard of. Turns out the book was published three years before I was born, but I swear I never heard of it or anyone in my elementary school reading it or it being at a scholastic book fair (I miss those) even once. I’ll ask any of my old grade school mates that read my reviews (all 3 of you) if you can recall seeing it.

In the meanwhile, should you see the movie?

So the book was adapted for the screen by Eric Kripke. If you’ve watched the CW channel in the past thirteen years you’ve seen his name on a little show that much like its main characters refuses to die, Supernatural. As the creator of the show he will always be on the credits, he also happened to write eleven episodes himself. He was also behind such shows as Revolution and Timeless. This tells me he is good at making a product that does have mass market appeal, but also can have issues sticking the landing. He has a grasp of charm, pacing, mystery, and banter; all of which are necessary in a “haunted house” story that has a child, his eccentric uncle, and purple clad neighbor investigating the house for a mysterious clock. Quite honestly, there’s only a slight roll of the ankle on the landing here the movie is quite solid. There’s a bit much exposition here and there but its told as innovatively as they can and it does succeed in telling a coherent, charming, even quaint little story that is engaging.

Coming out of left field to direct is the gorehound himself Eli Roth. Roth is best known for his work on things like Cabin Fever, Hostel, and the Green Inferno, so of course this man is tapped to do a movie for a kids book. Without looking into it, I would guess this is something he asked for and fought for to get made vs being handed a script by a studio. This has the fingerprints of a passion project on it and sometimes that can be dangerous, yet here it wasn’t. You can tell by the darkness and atmosphere this is an Eli Roth production, but it never crosses the line on being too dark even if it dances on the razors edge with one or two shots. His overall composition is basic without any significant style to the shots, but each shot is still framed beautifully. You don’t always have to have a dutch angle or an inverted camera to make it good and Roth and his cinematographer Rogier Stoffers stick to the basics, but make it count. No one will be talking about it (but me probably) but the simplicity and cleanness of it was noticeable and worked for the movie.

From an acting perspective, this was Jack Black at his best. All of his usual schtick and overt goofiness is entirely subdued here giving a performance still fit for a kids movie, but still mature. I haven’t seen anything like this from him since King Kong with Peter Jackson (2005). I might actually go see more Jack Black movies if this is the direction he chooses to go. Aside from *one* scene it was nearly a perfect performance for my humor tastes and with just the right amount of drama to it that the movie needed.  Cate Blanchett is a goddess and can do no wrong. Much like Black here she has a subdued performance for a kids movie and there’s a single beat that had my eyebrows go up which I would believe was Roth’s choice, but damn if she didn’t sell it (again with a kids movie in mind here). Owen Vaccaro is our principle child actor here and he has a few beats that don’t work, but I am going to cut him some slack because they weren’t bad takes just not the best I think he could do. Overall his performance felt earnest and honest and he sold me on the character he was playing.

Visually the movie is a treat. It has atmosphere dripping from the walls almost literally and I want that house. All of it. The creature animations there are are bright and colourful but still are within the darker tones of the film. There’s only one real shot that could and should have been given a second look and I think Jack may have asked for it as its closer to his style, and the movie could do without. It just gels otherwise. This isn’t to say the movie doesn’t have some flaws as well. There’s some pacing issues that come hand in hand with the exposition dumps mid movie that may bore some children but otherwise the pace moves decently through the plot briskly enough you won’t find yourself checking your watch.

This is a cute, fun, little movie. It’s timing just at the start of fall is no accident as this movie feels like it should be a fall or halloween movie.  The only real complaint I have is asking myself and my partner tonight who is this movie for? It didn’t feel like a Young Adult demographic in its style or story. It might be a bit too dark for kids too young, so the best I can figure is the 8-12 range?  The performances are good, the plot is good, its just a good movie that families, including the adults, will be able to enjoy.

It’s got my vote.  With a lackluster September overall and no real offerings for the families yet this should be able to make a decent amount this weekend and is worth that. You can pay full price here and not feel cheated.

So you going to buy this family friendly movie?

If I am being honest, probably not. When it comes out on disc and if I see it I might.  It does have rewatch value and I am always for good atmosphere.

I was surprised how much I was entertained. From the 80’s throwback Universal Logo, to the old Amblin Logo, I can’t help but think of something like Monster Squad or some of the movies I saw when I was a little girl and this would fit right in. I am happy I saw it and I think, most people will be as well.