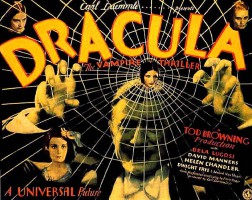 Going back to the classics is fun. Watching how they were shot, how they were scripted and acted. Dracula is no exception to this. When I was a little girl my elementary school and the public library had books on some of the Universal Monsters. I devoured them with special attention to the Wolfman and Dracula, though unsurprisingly Dracula was the one that truly captured my attention then and forever. I tried to read the book around the same time, but as bright as I am told I was, the wording was too dense for me at the tender age of 7. I have long since fixed that and even managed to get my hands on the tome that is the Annotated version. So being able to review this movie, while not quite the best, it is definitive. All other Dracula and Vampire movies after owe something to this.

While not the first time the name graced the silver screen -I am not including the stage plays – , it was the first authorized time. Ok, there is also a little known Hungarian Film “Dracula’s Death” which has a character who thinks he is Dracula in it.  FW Murnau’s Nosferatu was the first film vampire, though this was unauthorized after a suit from Stokers widow and all copies were ordered destroyed. This can also be considered the first supernatural thriller, I will add the addendum, by American hands. Universal studios hit something special when they did it. Little known fact that a Spanish version of the film was shot simultaneously. Now you might be going “alright cool, they made a version in spain at the same time.” Yet, I return with “No! They filmed on the same set.” The american version shot on the stages during the day and the spanish version at night. The spanish version is sometimes considered technically superior and for the time a bit racier and sexier than its American counterpart.

The movie was directed by Tod Browning officially, though behind the scenes stories and comments made by cast and crew indicate there was either a total lack of direction or that Karl Freund, the cinematographer, stepped in. Browning was a go to director for studios having done dozens of films prior, including the Lon Chaney classic London After Midnight. His expertise was in silent film and outsiders. This explains much of the silence within the film and certain choices that were made. Freund for his part was just as important. Tracking shots , high camera dollies, and even the atmosphere within the movie are largely attributed to him. Horror movies in general owe so much to this, both good and bad.

Edna Mode does not approve.

Its hard to talk about a story and the writers since everyone knows it. Of course it is inspired by Bram Stokers novel from 1897. Stoker for his part had heard of the man Dracula and used him as a springboard with next to no research and never having been to Romania himself. This accounts for many of the descriptions of places and things within Transylvania not being remotely like how they’ve been filmed. His novel then was adapted for the stage, officially, by Hamilton Deane and John L. Balderston (Didn’t I mention him recently in the Mummy). Garret Fort has credit for a version of the play script. When it comes to the movie however, this one falls under the movie writer curse: 5 total writers, including the director. There are significant changes from the source material to this of course, no real change there from Hollywood, but the biggest and probably most impactful is the Lugosi look. Dracula was always described as off putting, yet here we have something and someone foreign and handsome.

The Borgo Pass: Erosion the true terror of Dracula

Lugosi was not the first pick. He wasn’t even the second or third. The original choice was Lon Chaney who died, before production began, due to cancer. Called the Man of A Thousand Faces, his roles in Phantom of the Opera and the Hunchback of Notre Dame made him one an easy pick. I don’t know what he would have looked like in the make up, he was one of the rare actors who truly enjoyed the chair and the prosthetics. Lugosi however with his look, powerful and hypnotic eyes, and trade mark accent ended up with the role and the world has never been the same. Sadly the studio did not offer him a contract after the success of Dracula, as they did with Karloff on Frankenstein and he had trouble being seen outside of a certain genre after. Perhaps one of his greatest single work after shows the mans true talent for acting, The Black Cat, in which he starred  against Karloff himself.

The rest of the cast has Helen Chandler as the ever staring Mina, who was fantastic on stage but did not make much of an impact in movies. David Manners, who also appeared in the Mummy and Frankenstein as John Harker here. Edward Van Sloan as Dr. Van Helsing. Seriously all this man plays is the Doctor who knows it all!  Dwight Frye though is the standout. His Renfield defined the role for almost a century to come. It was as problematic for him as it was for Lugosi in the work field after. He shows the widest range of acting in the film with his eyes, vocal pitch, laugh, and mannerisms are truly iconic.

Even the movie magic of the day was amazing. While obviously not a lot of it holds up today, some tricks like Dracula walking through a spider web really do. Today someone would use some half baked CG work and give us something laughable, this wasn’t. This was alien and new and creepy.

I highly recommend any cinephiles to see this at least once in their life, if they have not already. If you are a fan of all things vampire like I am this is a must have in your collection.

If you want to see where it all began, absolutely watch this.

Modern movie goers will eye roll at the acting and some interesting flubs in the film, but it is a classic and worth watching – at least once