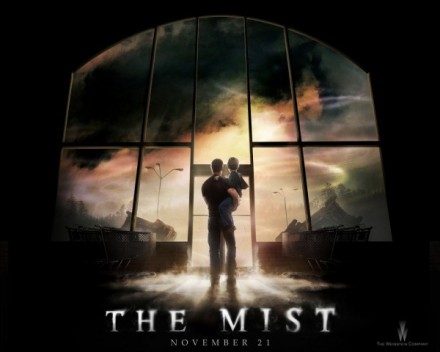 As we move back to more mainstream horror, let’s go to one of the most prolific and deserving men of the last half of the century, Stephen King. It would be easy to say he is one of the most recognized and important writers of the western world. I am proud to have a collection of most of his early works in hardcover within my library. Today’s review covers one of his stories that affected me the most as a child, The Mist. I had the opportunity to get this as a book on tape (with sound effects) around the age of 9 or 10. I grew up in a place that got mist/fog on a not too irregular basis so the one two punch made for an interesting time the next few times we had it. I’ve read the short story over a dozen times just because how good it is.

That makes this one of the violations of the read it first rules as I was reading this long before I imagined I would be writing reviews.

So how did the movie turn out?

Written and directed by Frank Darabont, who probably is the most successful individual at adapting King’s works with such films as The Green Mile and Shawshank Redemption. TV watchers may know him as the man who gave us The Walking Dead. He shows a brilliant command of moving his actors, the dialogue, and the vision through beat by beat and page by page. King gave a lot to work with, but history has shown us not all King adaptations are made equal (It, The Langoliers, Sleepwalkers); but Darabont not only lifts dialogue from page to screen, but the atmosphere and the scenes page for page. For a film like the Mist the atmosphere is critical. From an additional story standpoint the movie does a good job of showing multiple points of view during such an extreme crisis, those who turn to religion, those who deny at a flat earth level, and those who accept their situation and want to survive it. The discussions of humanity, fear, and human nature while mostly being sound bits are handled better than most films who spend time on it.

Of course good acting is a well to sell that the atmosphere and horror is something to be concerned about. For that Darabont put together an excellent cast of actors. Thomas Jane plays artist David Drayton a guy from the city living in a small Maine (of course) town. A massive storm damages his lake house and that of his neighbor Brent Norton (Andre Braugher: Brooklyn Nine-Nine); so Drayton, his son, and Norton head to town for supplies. A strange mist envelops the grocery store trapping Drayton and everyone inside. Shapes and sounds begin to move in the mist as well as the screams of those caught in it. Selling the horror is a cast of people we know even eight years later, Marcia Gay Harden (Law and Order: SVU) plays the whack-a-doodle Mrs Carmody,Laurie (Andrea – Walking Dead) Holden, Toby (Captain America) Jones, William (Die Hard 2, Iron Man 3) Sadler, Jeffrey DeMunn (Dale – The Walking Dead), Alexa (Clash of Titans) Davalos, Sam (Being Human) Witwer all play their A game to sell the film. While we are discussing the raw number of future Walking Dead, we even have Melissa (Carol) McBride in an unnamed role within the film.

The effects are a wonderful blend of practical and CG. The CG is a bit dated, but it tends to the higher end at the time. If you watch the movie in black and white, which is one of the DVD features they become nearly seamless between practical and computer. Now, this past few days I have been discussing how awesome KNB EFX is.  Once again they are the stars of the effects show with Berger, Kurtzman, and Nicotero at the helm. Seriously Hollywood go to these guys more and go less to your computer departments. Please? Creature design was top notch and original and perfectly in line with the book as well. It is positively Lovecraftian.

The ending, I will not spoil, but need to discuss – so bear with me. King is quoted as wishing he had the balls to do the ending that came from Darabont’s pen. Actually…go to the bottom of the post and roll over the SPOILER section to read more.

The Mist is a master class in horror film-making and book adaptation. Darabont was in top form and well deserving of getting to start the Walking Dead a few years later. Great cast, great effects, great film.

If you are a horror fan you need to see this at a minimum and have it in your collection if at all possible. Take the opportunity to watch it in black and white as well.

DO NOT READ UNLESS YOU’VE WATCHED THIS

YOU HAVE BEEN WARNED

Darabont went with kill your darlings. King went with hope and hopelessness. Both endings are really solid. Darabont pulls off the car and the final beats with an artist’s stroke, but then….then he ruins it. There’s two sides to this. One it increases the sense of hopelessness and the Lovecraftian break of a character’s sanity, but at the same time it also shows that the army comes in and saves the day. It ends the threat. King left the threat, still left you feeling hopeless but stood on the edge of hope. It left you with uncertainty as my friend said.