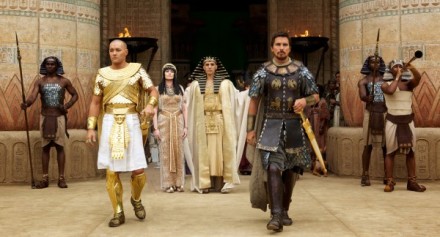 I apologize for the semi fake out on the title everyone. I have not seen this movie, nor am I going to; what I want to do is tell you why *you* shouldn’t see it. I have been planning this rant / boycott effort for months now and still never settled on what I was going to say. I want this to be eloquent yet short enough you read it. I want it to stick in your mind but not be shoved down your throat. Please bear with me those who keep reading. I will even have a TL;DR at the bottom as usual.

You may notice I will be trying to be painfully careful with my words here. Using more words than might be needed. I have seen several other posts on this topic where the concepts of Race/Ethnicity/Skin Color/Heritage begin to blend and be used interchangeably. There is a fascinating article over on Io9 on such a topic here, admittedly the author does blend the two a little bit more than I think they realized or wanted. I also admit as I write this longer I may do the same – so I apologize again.

Hollywood has a problem. It loves to white wash cultural history. Now if you are not familiar with the term white washing beyond painting a picket fence white, it is the concept of placing a white or rather Caucasian European into a role that could also be played by someone of any other skin colour and in fact probably should be played by someone of another ethnicity or level of melanin in their skin based on genetics. This was most famous in older Hollywood films with black face, red face, and other methods to cast white actors in roles that should go to people that are being portrayed. Now in some context this could be almost excused due to societal bias at the time.

Much like Disney’s Song of the South is all but banned in the United States for it’s extraordinarily strong racist overtones, other Hollywood films had similar racist and white washing behaviors. If you aren’t sure what I am talking about – The Ten Commandments (direct corollary to the film we are discussing sort of) with Charlton Heston as Moses, Yul Brenner (He’s Russian folks) as Ramses, and Anne Baxter as Nefretiri. Warner Oland in the old 1930’s Charlie Chan movies, David Carradine beating out Bruce Lee for Kung Fu, Mickey Rooney as Mr Yunioshi in Breakfast at Tiffany’s. Of course there is Sir Laurence Olivier as Othello, John Wayne as Genghis Khan…the list goes on. (source: my own IMDB research, Buzzfeed , and Smosh ).

You might say, or hopefully just hear the argument – Times have changed! Have they really? Excluding Exodus for the moment, let’s look at Avatar the Last Airbender the movie. Two white actors ( I use that word loosely here) were cast as what should be Inuit or native arctic circle people. This is intentional, as the rest of their village seems to be right. The animated series has four distinct cultures and countries displayed throughout, yet the movie white washes the main casting for no rational reason. Arnold Vosloo as the Mummy? He’s fun, but he is South African. Even more recently (and more lamented) The Lone Ranger with Johnny Depp as Tonto. Now, this isn’t disparaging his performance, but instead the casting. How many Native actors would have wanted that role? Could have had that role. But no it goes to a man who for all intents and purposes is Caucasian Western European – despite any heritage. Sorry I think half of the people I know claim to be XX% Native American. What of Dominic Cooper in The Devil’s Due or Dracula Untold? Great actor (bad roles sometimes) but really?

Why was this done? Well…the Producers mostly. They don’t think that non white people are bankable in these roles. Think I am interpreting something that isn’t there? Lets take this quote from Ridley Scott himself on Exodus.

Scott, 77, previously said of Exodus: Gods and Kings: “I can’t mount a film of this budget, where I have to rely on tax rebates in Spain, and say that my lead actor is Mohammad so-and-so from such-and-such. I’m just not going to get it financed. So the question doesn’t even come up.” (Source: The Guardian )

Hollywood does not cast main actors who are not white in major films because they don’t think we, as an American audience, will see it without that. Hellboy, for instance, had an entire character created just to be the audience foil. The FBI agent was there because they didn’t think we’d be able to identify with the host of characters without our white male lead. So with Exodus we get Christian Bale as Moses because, thanks to Batman, he is bankable. We don’t get to a single non Caucasian Western European until you get into the tertiary characters. 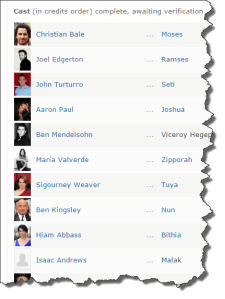 Please don’t try to argue that Sigourney Weaver or Ben Kingsley are bankable right now? They are fantastic actors, I love them both, but do they put butts in seats? Lets look at the casting of Ramses. Joel Edgerton what has he done? Actually quite a bit as a secondary character. He is another good, solid, talented actor – but really does he have an audience draw to put butts in seats? How many of you could tell me without checking IMDB that he was in the Great Gatsby, Zero Dark Thirty, or Star Wars Episode 3? I don’t imagine there are too many hands raised in front of the computers. So we had to cast him? I am not doubting his talent. I am doubting the choice and others when we have:

Oded Fehr (Israeli) , Faran Tahir (Pakistani), even Wentworth Miller (Syrian/Lebanese), Salma Hayek, Tony Shaloub, Corte Di Pablo (Chilean, but famous for playing Ziva David on NCIS), Natalie Portman (Israeli). I would even take Greek actors such as Melina Kanakaredes. Most of this list would at least give credence to Scott’s other even worse excuse for the casting choices (source: Yahoo)

Q: What was in your mind when you set about creating this international cast?

Egypt was – as it is now – a confluence of cultures, as a result of being a crossroads geographically between Africa, the Middle East and Europe. We cast major actors from different ethnicities to reflect this diversity of culture, from Iranians to Spaniards to Arabs. There are many different theories about the ethnicity of the Egyptian people, and we had a lot of discussions about how to best represent the culture.

Now…Scott himself is taking all of this criticism from other more famous sources than I in stride. In fact at The NY Premiere on December 7th he told Critics to “Get a life” (Source: The Guardian )

Is Hollywood the only problem here? No. We are as an audience. Surprisingly Christian Bale gets it and can sum it up quite well:

“I don’t think fingers should be pointed, but we should all look at ourselves and say, ‘Are we supporting wonderful actors in films by north African and Middle Eastern film-makers and actors, because there are some fantastic actors out there.

“If people start supporting those films more and more, then financiers in the market will follow. The audience has to show financiers that they will be there, and [then] they could make a large-budget film.

“To me, that would be a day of celebration. For the actors, it would be wonderful. It would be a wonderful day for humanity, but also for films and for storytelling in general.” (Source: The Guardian)

We have the power here people. We have the power to make this change and tell Hollywood we WANT to see representation of more diverse individuals in our movies. Many of the people I know complain about this sort of thing, but don’t know how to do something about it…so let me get to the

If we want to fix white washing in Hollywood – Boycott this movie. DON’T See it. Don’t rent it. Don’t buy it. Tell your friends not to see it. Tell your family not see it. The movie IS problematic and we can be part of the solution to that problem through the simple act of – not doing anything. We don’t have to see it. We can tell Hollywood producers and Ridley Scott that we want change by not seeing it. Let the movie bomb and bomb hard.

If you want to see a similar film (albeit with similar casting choices for voices) that is done better and at least depicts people of the right colors and shows some levels of cultural awareness – see Prince of Egypt instead. It is an awesomely underrated animated film from the late 90’s.

If you decide to see it, if you absolutely want to and are OK with the problem – I get it. It’s not your problem to have. I hope you enjoy it and get your monies worth. If nothing else with this post I hope I have made you think a bit. Maybe opened a few eyes to some problems out there – and they are problems.

Sorry for the longer than usual post, but I am passionate on this. I love movies, but I want to see them get better not stick to old stereotypes of casting.

PS: Thanks to Sorah Shibao Art for being my editor on this one. I have the ‘luxury’ of white privilege and didn’t want to be talking out my rear.