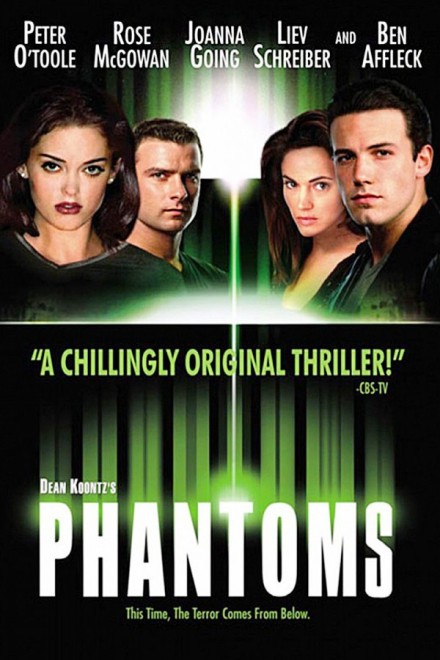 Apparently this is also the month I review movies based on books by Dean Koontz. The other day with Odd Thomas, now with Phantoms. I might have to check to see how many other stories of his have made it to film and by extension to my collection. I do remember seeing this one when it came out and admit to being intrigued by it and it’s cast. This one falls under the near hundreds of movies Dimension films who provided us much in the way of low budget horror, some was effective, some was not.

As mentioned before the film is based on a Koontz novel of the same name and is given the screenplay treatment by Koontz himself. Now per usual Jess rules, I have not read the book prior to watching the movie and have not read the book in the years since for no particular reason. So judging purely from a cinematic perspective the story does a good job of creating tension and even better job of atmosphere. I can’t say the third act does the movie any justice but that is the difficulty with page to screen adaptations.

The movie is directed by Joe Chappelle, since then mostly a TV director but with shows I rather enjoyed such as Wolf Lake, Witchblade, and the Wire. He does an interesting thing in the movie to create tension. The usage of an empty town and a lot of well chosen but jarring sounds to disorient the audience and the characters. For the most part these work and most of the jump scares are not eye rollingly bad – that is a compliment by the way. He and Koontz also did a great job with the geography to assist in the feeling isolation.

Due to the nature of the story the cast remains relatively small, but effectual. The late Peter O’Toole (My Favorite Year, Lawrence of Arabia) positively owns his scenes in the film and brings weight where a lesser actor wouldn’t have been nearly as impactful or successful. We also have young, we barely knew you, Ben Affleck. He hadn’t quite learned to reserve himself yet and almost disturbingly blinks too much. Odd quirk to notice, but it’s actually kind of distracting. In another we barely knew who you were we have Liev Schrieber (Wolverine, Scream, Salt) in an oddly quirky performance that is a bit off putting, but having seen his other works tells you how good he did here. Our films heroines come in the shape of an on the rise Joanna Going (Dark Shadows 1991, Wyatt Earp) and another dimension films ingenue Rose McGowan (Scream, Charmed). Both play opposite ends of the sister spectrum pretty well with McGowan as the young city girl and Going as the small town doctor. Everyone performs OK, they do well with the panic, they do well when its time to be quiet. Nothing great, nothing really bad either. Just ok.

From an FX perspective, again minus act three, the film relies pretty strongly on practical effects, sound, and lighting to build suspense. Now given Robert Kurtzman, Greg Nicotero, and Howard Berger of KNB EFX Group were on the project it explains so much. Now people like me know these names because of the fantastic effects work they have done over the decades and how amazing they are with gore, creatures, and prosthetics. Currently you can find their work on a no name show called The Walking Dead. These guys were incredible now and then and the movie benefits from it. The intelligence of the director to use practical effects here when possible was brilliant as the world was already moving towards not only using but abusing CG. Sadly, what digital effects were used didn’t look good then or now.

Honestly this is a pretty good, if someone dated, suspense film from early Dimensions film works that did better than it’s extraordinarily dated trailer would lead you to believe. The movie does take an odd turn late in the picture which doesn’t quite resonate but also doesn’t destroy the film either.  There are some clear edits and scenes missing, but otherwise it works.

If you aren’t a fan of horror or suspense in general – give this one a good pass. They did a good enough job here to wave you off.

If you like 90’s era suspense and horror I think you could enjoy this film. 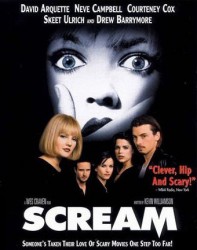 The early 90’s were fairly horrible when it came to horror movies. With only a handful of minor exceptions, the films were little more than retreads or sequels of better works from the 80’s. They also gave us the start of many a horrific franchise (Leprechaun) and the death of others (Alien 3). I mean sure we were getting Stephen King movies as mini series on TV, we got Flatliners,  Tremors, Bram Stokers Dracula, and Prophecy. We also got things like Graveyard Shift, Gremlins 2 (it classifies as horror..not sure why), Nightbreed, and Tales from the Hood. There are a few gems, but the reality is horror was generally horrible during this time. So 1996 comes around and we get a trailer for a new slasher film with a name that we associate to real horror.

The trailer puts a lampshade on all the films we have watched for the past two decades. Rules around sex, what you can say and can’t say, what to do and where to go. All the things that we shouted our TV’s when we watched these films on VHS time and time again. It showed us Drew Barrymore who had nearly vanished into a career of obscurity. It showed us Party of 5’s Julia – Neve Campbell talking to us with a certain self awareness of horror movie tropes. We had no idea what precisely we were getting, but it intrigued us.

That name I mentioned earlier – Wes Craven. The genius behind Nightmare on Elm Street, who had not been having a good decade, that had also given us Shocker, The People Under the Stairs, New Nightmare, and Vampire in Brooklyn. He somewhere along the way was given a script by new comer Kevin Williamson. Between the two of them they put together a movie that is both satire and a love letter of what horror had become since the beginning of the slasher flick. It is beautifully self aware of what it means to be a horror movie and what it means to be a character in a horror movie. It mocks and flaunts the rules and even calls attention to them. We had not had a film that does this ( to my knowledge) before this and to our benefit and our detriment have had dozens since then. This also probably single handedly relaunched the teen slasher film. Williamson, would go on to write I Know What You Did Last Summer, The Faculty, and The Vampire Diaries. While he sticks to some tropes, he does actually know how to write teens. This is more rare than you would think.

Craven himself being the master of horror knew what buttons to push, how to craft this, and what to draw out of his actors. He, being one of the forerunners of teen slashers and having seen what it had become was the prime person to do this. Giving him a decent cast also helps. Neve Campbell is our heroine and protagonist of the film and unlike so many others prior – starts strong. She may be virginal, but she is also damaged in her own way and because of that damage is stronger than the typical victims in films prior. The movie also launched the careers of Rose McGowan (Charmed), Jamie Kennedy, and Matthew Lillard (Hackers),  and Liev Schreiber (Wolverine, Salt). Skeet Ulrich, previously seen in The Craft, plays a similar role where its hard not to see him as scummy.  We also have the movie that introduced Courtney Cox and David Arquette, that lead to a marriage in 1999 until 2013. All of these actors combined actually turned a good performance together and made this film work as well as it did.

Even from a technical perspective and execution of the work the movie holds up. We’re almost twenty years out from this one and the plot holds. Even on repeated viewings it holds. That’s not something that you see often. Even the minor bits of gore in the film look good with decent attention to detail. The combat sequences, yes I call them that, are just as inventive and show a growing perception of using the environment to your benefit.

Scream is the rebirth of the teen slasher.

It is a well made, well planned, and well executed film that delivers on all counts and deserves recognition. I happily put this as a modern day classic and worth watching. The sequels…well I will cover them later.