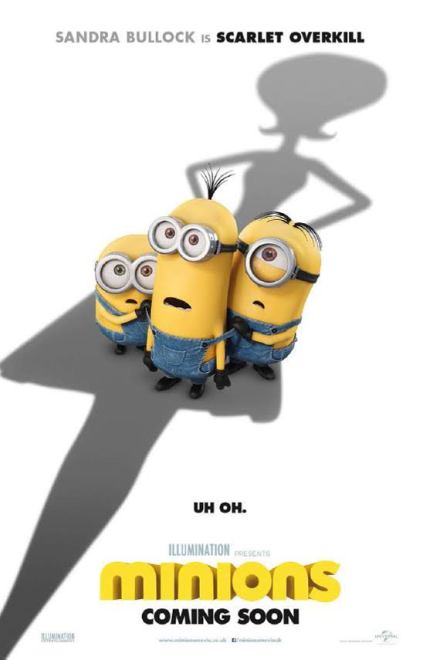 It is well established that I do not get comedy as a general rule. There are always exceptions, but for the most part comedy and I are at a disconnect that I just can’t quite grasp. I frequently ask people ‘why was this so funny’ (in a non ironic/non-trolling way) and still just don’t get it. I tend to be almost equally picky with my animation and animation styles as well as to what I want to watch and what attracts my eye. I had no desire to see Inside Out from animation to voice, to well everything. Saw it, refuse to review it as I think I am artificially biased against it from some things during the movie.

Much can be the same for Despicable Me and Despicable Me 2. Two films I didn’t think I would enjoy as much as I did and did not see immediately. So when I heard they were making a movie about the Minions I was cautiously optimistic as it was a clear and present money grab yet I had been surprisingly pleased by the first two films.

Did I enjoy myself tonight seeing this? Am I upset at the people who requested that I see this instead of something else tonight?

The reality is – this is a cash grab. It is a well made cash grab. The script by Brian Lynch (Hop, Puss in Boots) is irrelevant. You can’t understand the characters. DM/DM2 director Pierre Coffin returns with a partner this time in Kyle Balda (The Lorax, and layout supervisor from DM) so they have some credentials to them. I can’t go into too many details here without hitting spoiler land, but what you see in the trailers is more or less what is delivered for the rest of the movie too. It is one of the few times that the trailer is 100% honest on what you see is what you get.

The producers pulled together an amazing voice cast to fill in the humans speaking roles, with Michael Keaton, Allison Janney,  Geoffrey Rush, and friggin Hiroyuki Sanada (I will make you look him up. Suffice to say he is awesome). Of course there is Jon Hamm and Sandra Bullock who steal the show with their characters, Herb and Scarlett Overkill. It is amazing to think that Don Draper is Herb. They are just the right amount of over the top to make it work for a movie in this universe. Just ridiculous enough that you appreciate them and enjoy them but don’t roll your eyes. Coffin himself does the voice of the titular minions as he has in previous films.

You have to admit something here. This movie proves a few psychological studies true. You don’t need to understand someone to understand them. Body language, tone, everything else can tell a story as successfully as dialogue. Coffins voice acting, such as it is, does a rather good job of letting you know what is going through those little yellow freaks heads.

The other half of that equation is the animation. It is top notch. For a money grab they didn’t go the Disney route and give us a half-baked sequel with less quality in the animation. In fact I would argue that some of it has gotten better. The texture mapping is spot on for many materials to the point where I was truly impressed by the details as I have seen movies with the real thing that didn’t look as good. The artistic style hasn’t changed, which is good, but the animations have gotten much better. There’s a smoothness to them that is actually improving. Points there.

Before I hit the TL;DR on this rather short review I will say this – the movie is kinda well flat. I heard some of the kids getting restless, some of the adults too. There were times they laughed as there are jokes for adults in this project and it’s mostly bright colours and familiar characters for the kids. Let me get to it then…

I didn’t hate it. My movie going partner tonight, and I, knew that walking out; but we were scratching our heads wondering what we had just watched. It was enjoyable, but hollow. It’s pacing was quick, yet empty? I think we just see the quick production and the flaws become apparent, but not enough to detract from the beats that worked and worked really well. The movie *is* cotton candy. Light. Fun. Mildly Satisfying. Leaves an odd, but not unpleasant taste. Instantly forgettable.

That said, there is absolutely a lot of material for adults and children alike here. It is still fun.

This is good alternative fare for those who need something they can take the kids to, which has really been in short supply this summer.

If however…you need to make a financial choice between this and Ant Man – you might want to hold off a week and see how my review comes back on the next Marvel piece.