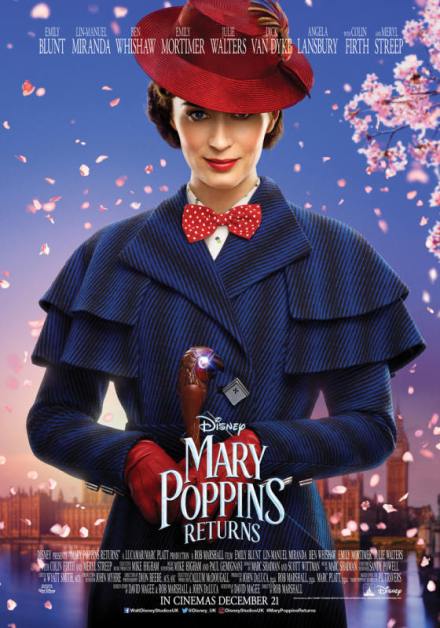 Chim Chim-in-ey, Chim Chim-in-ey, Chim Chim cher-ee! Lyrics I sing at random to this day. I am sure for others it’s a Spoonful of Sugar, and even others still want to go Supercalifragilisticexpialidocious. I suppose even some may go dociousaliexpilisticfragicalirupes, but thats going a bit far don’t you think? So with children from the late 50s and early 60’s coming into contact with dear Ol Mary Poppins, to those of us in the 70’s and 80’s thanks to the Wonderful World of Disney, and the advent of VHS its safe to say the original movie has earned its reputation as a beloved classic. We all have the nostalgia glasses on for the original regardless of our feelings now, so the concept of a sequel coming out 54 years after the original is a bit jarring, wouldn’t you say?

Does it still have the magic though?

Director Rob Marshall (Chicago, Into the Woods, Memoirs of a Geisha) , along with his partner John Deluca (Choroegrapher on Chicago and Nine), provided us the screenstory for this and David Magee (Life of Pi, Finding Neverland) wrapped that work up and converted it to a screenplay. They remembered what it was like to have a sense of wonder again, to turn things upside down and look at the world as if it had magic again. The story at times may be a little (a lot) on the nose with some more current trends; there is almost always a sense of the fantastical as the story unfolds. Mary Poppins returns to the Banks family, roughly 20 years after the events of the last film. The Banks family is out of money and time before they lose their home, but our wonderous Nanny comes in to provide some much needed lesson and perhaps a sense of adventure as well. If anything the flaws in the story are that it is just a bit too straight forward in its symbolism and meanings; but when making a movie for children of all ages great and small – is that really a bad thing?

The unfortunate bad thing is that the songs just do not work nearly as well. They aren’t bad by any stretch, but I can’t forsee anyone remembering these fifty years down the line. The movie does go full musical and there are far more songs than I remember in the original, but everyone puts on a good show and I can’t fault that at all. I just wish the dance routines, the songs themselves had just that little something extra to make their magic come alive in the same way the visuals did. You can see the songs that Marc Shaiman (Hairspray, Smash) was going for when he worked out the lyrics and beats for the music and while they are lovely homages to 1964, I can barely tell you any of the lyrics now as I write this review. This isn’t a matter of repetition either, most of us may have only watched Mary Poppins a few times as children but we remember those songs to this day, none of these truly hit that and its a bit saddening.

Emily Blunt of course is practically perfect in every way and was the only real choice for the role. We knew she could sing and dance thanks to Into the Woods, and her class and charm are without question – who else could be Mary Poppins now? She brought the same type of personality that Dame Andrews did, and also remembered how to bring the more subtle, quiet moments as well. Rather than a sweep, we have Lin-Manuel Miranda as a lamp lighter named Jack, who fills the exact same niche that Dick Van Dyke did all those years ago. Miranda has fantastic screen presence and anyone who thinks the man can’t sing or dance should be flogged accordingly; and thankfully he does not try for a cockney accent. Ben Wishaw (Q in the recent James Bond movies) as our grown up Michael (the child from the first film) despite being 38 doesn’t look old enough to be the part of a father of three. It might be a combination of his clothing and his natural youthful appearance but he really does look like a boy trying to be a man. Perhaps that’s the point though? The three children Pixie Davis, Nathanael Saleh, and Joel Dawson ride that edge of being too much at times, but really do have what it takes to keep the audience endeared to them.  It was nice to see Julie Walters (Molly Weasley you muggle) again, even in the bit role she had; which can also be said for perennial villain David Warner (Tron, Titanic) in a far more pleasant and amusing role as Admiral Boom.

The costuming was amazing. Period. Do not pass go. Do not collect two hundred dollars. When we get into our second animated-live-action hybrid sequence the look and style of the costumes are just so perfect. Overall the entire production design was spot on and let me feel like I was in that early London period. If anything there is a flaw in that it doesn’t feel like sets this time and is more real. Odd thing to call as a flaw. At 2 hours and 10 minutes though it does feel a bit long, but I checked and the original runs 2 hours and 19 so…improvements?

Mary Poppins Returned. From an opening credits of chalk art and matte paintings that reminded me and my partner tonight of vintage Disney, to the time of CINEMA and Audrey and the classics, to the true sense of joy of being a child again (if only for 2 hours and 10 minutes); the movie is absolutely cute. It is charming and nostalgic at the same time without being condescending or manipulative about it. While none of the musical sequences themselves made me want to sing along, coming out of the movie I was light on my feet and was dancing through the parking lot of the theatre.

The movie does lack some of the quieter beats the original held and has some more modern film making flaws cooked into it that would be inescapable, it really is a solid work. It’s a project born of love for the stories of Mary Poppins and a movie from 1964 and it does show in every frame. This is the definition of a family film that could satiate multiple generations and could become a holiday classic at home for some families.

If what you want is that sense of child like wonder again and a sense of the nostalgic beyond pop culture, you would be well served to see this. I do really believe this is an excellent family film for all.

Quite likely, but that would be after seeing Anna and the Apocalypse or Spider-Man again. Still worth a rewatch though.

So you are buying it?

No doubt in my mind.

I think my estimates on its weekend take are about right, but I do wish people would see this instead of Aquaman. I will also say that the cameo’s by Dick Van Dyke and Angela Lansbury brought me to tears, especially Lansbury. Not all of the songs worked for me, but the magic did. This is nostalgia worth experiencing and hit the spot for that sense of wonder.

Also Mary Poppins is a Time Lord. Fight me.