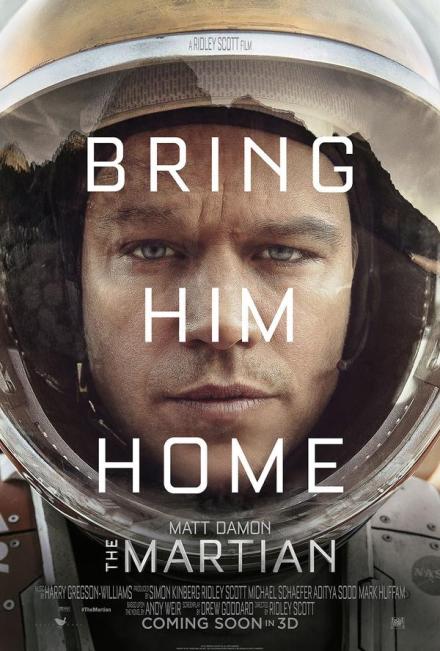 This is not part of my October reviews, fortunately or unfortunately, my regular reviews do not get trumped by October. I had every intention of seeing this Thursday night but exhaustion kicked in and a desire for a record 6 hours of sleep ended up winning. Having seen it today and after some rest I can provide you the review you deserve.  I will say this, do not let Matt Damon or Jessica Chastain near the space program. Something goes wrong every time; how is it he is the one always stranded?

Anyway; does the movie hold up to the hype machine?

The film is based on a book by Andy Weir and adapted for the screen by Drew Goddard. I understand from some friends it is an excellent book and will be curious to hear the comparison between the two. Goddard on the other hand was the producer of the much loved (and very awesome) Netflix series Daredevil, The Cabin in the Woods, and Cloverfield. He also wrote one of my favorite episodes of Buffy the Vampire Slayer, “Conversations with Dead People.” So the source material is very strong, the writer has some solid understanding of characters and tension but do they have a director who can do something with that?

Well lets talk the story for a moment. This is a what you see is what you get. The movie literally is: Matt Damon gets left behind on Mars. NASA tries to figure out how to save him, while he tries to save himself.

Simple story. You need good actors and a good director to make it work. I give you Ridley Scott. I give you the man behind the camera and actors of Blade Runner, Alien, Black Hawk Down, and the list goes on. He doesn’t have a flawless list (Robin Hood, Hannibal, Exodus) but a solid one. He, despite his stumbles, is a brilliant film maker who can do more to create tension with a shot and space than a dozen of the modern horror directors combined. That is what this movie needed. Tension. You don’t know if they will bring him home, you don’t know if they will all survive doing so. Goddard, Weir, and Scott have masterfully crafted a story where you just aren’t sure.

Of course some of the work must go to the actors. Matt Damon by necessity carries the film and he has the chops to do it. I was watching the movie and thought is there another actor who could do this? Short answer I came up with is no. End to end of this movie, there’s not another bankable actor who could do this with such charm and such range.  Then you combine it with the following cast members

This is the literal definition of a powerhouse cast. Each person despite how much or little screen time they are given manages to translate that into a memorable or otherwise engaging character. That’s art folks. This movie would die in the vacuum of space if you didn’t want to root for the characters. If you didn’t want to sit at the edge of your seat or bite your lip. Everyone is understandable in every decision made. Every action. Every consequence.  The movie lives and dies because of the performances these people gave in conjunction with solid directing, and source material.

In other words, this is everything Fantastic Four was not.

It is also not as pretentious as Interstellar, which I wanted to like, but really couldn’t.

As a technical point, the CG enhancement of the landscapes, the background, the skies made me really believe that they could have been on Mars. This is the George Miller lesson folks. Use CG to enhance not dominate. There’s only one slightly jarring, but appropriate effect in the movie. Everything else to me is beautiful. I was commenting the other day how claustrophobic modern movies tend to be. Tight locations, tight camera’s, fear of long range shots or appropriate long range shots. This movie is anything but. It uses distance as a tool as much as it uses sound and lack there of when needed. It really lives by show don’t tell on a lot of points and again is a better movie for it. If there are any other flaws, there’s some pacing issues (a Ridley Scott natural flaw) but otherwise that’s it.

I came out of the movie inspired.

I came out of the movie wanting to Science!

I came out of the movie satisfied with my experience in a way few movies this year have.

I highly recommend The Martian to anyone.