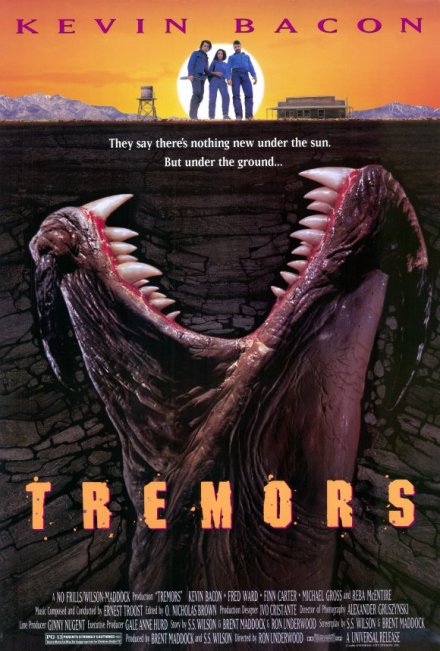 Another one right in the childhood, I remember starting high school as this one came out. I understand the 5th one just got released on Netflix this month. I vividly remember getting this on VHS and watching it ad nauseum with my grandfather. So going into this, I will say yes – I still like it.

The question is does it hold up and will you?

Rule of Three starts this one off, with a story by S.S. Wilson, Brent Maddock, and Ron Underwood. The screenplay is by Wilson and Maddock. Underwood also directs. What this tells me is that most likely Wilson and Maddock wrote the story and screenplay, sold it to the studio and that Underwood made enough changes during production to get a screenplay credit.

This isn’t a hard jump of logic as Wilson was also the writer on the abomination that is Ghost Dad, and the remaining Tremors films (and short lived TV series) up to part four. When you look at IMDB you see that Maddock has almost the same credits down the line. Now it’s entirely possible these two really just collaborate well, or one of the two names is secretly an Alan Smithee. Underwood  still works s a director on TV on such shows as Once Upon a Time, Grey’s Anatomy, Agent’s of Shield. Tremors was his first theatrical film, following quickly with City Slickers and dying a horrific death at the hands of Pluto Nash; sending him back to TV for the past decade.

Taking the nostalgia glasses off, our story bases itself around the small town of Perfection Nevada, population 14.  Our heroes are Earl (Fred Ward) and Valentine (Kevin Bacon) two local handymen and roustabouts who in their attempt to escape the small town and start a life elsewhere begin to find people on the outskirts of town dead. They quickly learn that subterranean creatures have been attacking and now it turns into a game of survive or die. ‘

It’s a basic creature feature premise, but there’s a lot of factors that make it work. You have interesting small town caricatures, two charismatic heroes, a good location, and a good creature design. The banter seems real, the chemistry between the cast genuine, the comedy beats sell. Every aspect of this movie works when you consider it as an homage to the 50’s and 60’s B-Monster movies. It really lives and breathes like one of these classic (not necessarily good) films. Kevin Bacon and Fred Ward have all the charisma to make this movie work as well.

From a technical standpoint, there are some interesting tricks of the camera that are used to give you monster POV at times which adds to the tension. There is some level of genius on the control to not continually show the monster but to rather give you the impression of their passing. Something I think if this incarnation were made today wouldn’t be done. There’s also, as I have stated numerous times, practical effects. The creatures are 100%practical and puppeteer driven. I can’t find a single computer generated effect, though there is some green screen.

Tremors is a thing of beauty. It is a wonderful horror/comedy creature feature. Nostalgia glasses are off as I write this, but really I find that the movie holds up really well twenty five years later. A large portion of that is due to Bacon, Ward, and the practical effects. It’s a tight story, not particularly scary, that has little to no fat or extraneous scenes.

I really like Tremors and if you haven’t watched it, I recommend it. Even folks who don’t do horror could watch this one.

This one was a request from a coworker and is  a few days later than I wanted, but I promised a review. The other reason it’s late is I had a bad experience at the movies and didn’t want to let my bias from the experience affect the review. This gave me time to really think on how I feel about the film and make recommendations with some time away from it.

So should you attend the Mass?

As we start this, you understand from my history this is not my preferred genre. I like good drama’s and the occasional “based on real events” films. I firmly believe there is a gap in time that should occur to let a film begin to fade from collective memory a bit and help us remember bits of our history we may not know as well. Films like Captain Phillips, The 33, and the upcoming film 13 Hours: The Secret Soldiers of Benghazi are too new, too recent for my tastes. This hits the right bridge of time away, but with individuals who are in recent(-ish) headlines.

The movie here focuses on that of James “Whitey” Bulger, leader of a small criminal empire, and his relationship with FBI agent John Connolly. Much of the film focuses on the relationships between Bulgers inner circle of the Winter Hill Gang and the interactions Connolly had with them and his own with the FBI itself.

It’s worth mentioning here that acting is amazing in this. Depp is back in form again and I want more of this man in movies. While Jack Sparrow probably allowed him to buy another island, it’s not why we learned to love him. The fact that he can become most anyone is. I lost Depp in this performance and saw the man he was playing and want more of this. Joel Edgerton has had a lot of high profile work and this probably for me is one of his strongest performances. Gatsby, Zero Dark Thirty, Exodus, show a growing penchant for him as a heavy, despite earlier performances in such movies as The Thing and King Arthur. He is a solid actor who actually showed an interesting range in the film. The other stars, such as Kevin Bacon, Peter Sarsgaard, Rory Cochran, Adam Scott, all do really well and craft whole people; which is good since they are portraying real people. That isn’t always the case in a performance, but thankfully was here. Benedict Cumberbatch does a passable job at a New England accent but not quite, but that could be argued as someone trying to fake a New England accent over a Southie accent, and in this case over his natural accent.

The screenplay for the movie comes from two men, Jez Butterworth and Mark Mallouk. Butterworth is one who was responsible for the beauty of Edge of Tomorrow and will be on the hook for Spectre later this year. This is Mallouks first writing gig. As the film is based on a book by Dick Lehr and Gerard O’Neill, I am not sure where to place some of the blame in dialogue. There are just some parts that are too ridiculous to believe anyone would buy, too tropish to be real and that took me out. Also, I am pretty sure the F-bomb is not actually punctuation, the movie disagrees with me to a level that would leave The Boondock Saints in awe.

Director Scott Cooper (Crazy Heart, Out of the Furnance) loves himself the close up. While not as bad as Maggie for having the camera in his actors face there are a lot of scenes where the actor uses well over 75% of the screen space with their noggin. It’s a technique that can work, but doesn’t always.  Also, the timing of cuts, beats, and overall pacing of the film drags a bit to the long side. I wasn’t expecting the Departed when it comes to action, but I wanted the pacing just a bit tighter. Also I would be left to believe things only happened every 10 years if the movie was my only guide.

Black Mass is a solidly acted film that I can highly recommend to anyone who enjoys the era of the Modern Mafia. If you love stories in, about, or related to Boston this is a must see. The city doesn’t live and breathe here as it’s own character despite their attempts, but you know where you are. The movie can be compared to one of my more favorite films of this type of genre Citizen X.

If you aren’t a fan of this type of film, you won’t miss anything. Even the curious could give this a pass. Save it for the genre lovers.