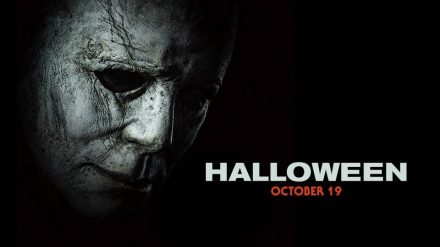 The most anticipated horror movie of the year, coming out two weeks prior to one of the most anticipated days of the year for a certain crowd. Halloween has a lot to live up to and a lot to make up for. A brief history for those who don’t fully understand where this movie is coming from; which considering the track record of the series makes sense.

Halloween was originally conceived back in the late 70’s to be a serial style movie with a different horror story each and every Halloween. When the original 1978 version made 144 times its budget back the studio insisted on a sequel and effectively dumped money in John Carpenters lap to do something he really didn’t want to; a sequel. Thus Halloween 2 in 1981 and why Michael and Loomis die at the end of it, with Carpenter having the vain hope of ending that story. In 1982, yeah, barely a year later, Halloween III: Season of the Witch came out. This was more akin to what Carpenter envisioned and tells an entirely different horror event on Halloween. It was too weird for audiences who were in slasher heaven and the title confused them expecting more Michael. So 6 years later as the horror and slasher craze grew with Jason, Freddy, and Pinhead, we get the Return of Michael Myers (1988). This is the start of the late Moustafa Akkad reign on the series, as a producer since the ’78 version he began to have more influence on the series along with other producers such as …the Weinsteins. This was the start of the story getting really convoluted and barely following its own continuity. Michael was back, Loomis was back. Now they introduced over the next three movies a cult that gave him supernatural resiliency and more. It’s so much worse than this, but trying to keep it simple here. After Halloween 5 (1989), and Halloween: The Curse of Michael Myers (1995), there is a slight break before Halloween H20. H20 was supposed to be a clean return to form on the 20th anniversary of the original. It returned to basics with Laurie and Michael, but just didn’t quite grab audiences as much as it probably should; even though it has possibly the second most satisfying ending in the series. The last of the original Myers series is Halloween: Resurrection and the less said about this the better. I will not discuss Rob Zombies Halloween movies – except to say I hate them. I’d rather watch the Cult of Thorn run (4,5,6) more than those.

With me so far?

So the writers were in a bind here. How do you tell a Halloween story respecting the lore, the history, and the icon that is Michael Myers but deal with the mess left by the sequels AND remakes? Simple solution reboot the series, but not from scratch. From the original. Ignore everything that has come since 1978 and go. Get Carpenter onboard for the first time in forever and see what you can do. I don’t envy the task Danny McBride (Pineapple Express, Alien: Covenant), his friend Jeff Fradley (writer for the HBO show Vice Principals), and David Gordon Green (Pineapple Express, and the critical darling “Joe”) had on this one. Ignoring the content of the other movies is easy, but really remaining true to what the original film delivered character wise and bringing that back 40 years later – thats hard. They are putting themselves, Green especially as a director and writer here, up for target practice.

They need not have worried if they did at all. They did craft an honest sequel to 1978, which has several references that make the necessary callbacks without reminding us of a better movie. With few exceptions no one here in the script does anything dumb or illogical. The characters make sense. They feel like they would make these decisions based on everything you know and it propels the plot forward; if anything aside from Laurie the script lacks care for some of the fodder leaving you to not really care as much when they die which removes some of the tension that could have added to the film. The kills, which are important in this genre are well executed and tastefully done and yes brutal; rather than gore porn or splatterhouse style. The camera remains as still as Michael letting you savor what you both see and don’t see in frame. There are so many shots in this movie that are perfect for a wallpaper for your phone or computer because of how they were filmed; which means credit needs to go to cinematographer Michael Simmonds.

The acting is fantastic from the majority, with Jamie Lee Curtis giving us the same sort of transformed character that Linda Hamilton did between Terminator and Judgement Day. Laurie Strode is damaged, but focused, she is brave yet so afraid. Curtis more than capable of delivering the nuance; while the script and shooting let her as well. Andi Matichak gives a very human turn as Laurie’s grand daughter Allyson, and importantly she feels like she’s part of this family. I’d like to enjoy Judy Greer more as Karen Strode, the daughter to Laurie, but the script and character do her no favors, nor do they give Toby Huss much to work with. I was curious how Nick Castle would be returning to play The Shape once more as he did a majority of the motion and body work in the 78 version; while three other actors did other takes including the one face shot. He nailed it. He and the Mask are a presence and malevolent.

Cutting the meat a bit short here, but its coming up on 2:30 and I do need sleep and really I just think you should see the movie. With a lean runtime of 106 minutes, John Carpenter back on the score, and some of the best horror cinematography I’ve seen in awhile Halloween is the return to form we’ve been waiting 40 years for. It isn’t perfect and suffers from some character issues and isn’t as tense as it could be Halloween was well worth the sleep deprivation for me and definitely worth it for fans of the franchise.

Yes. XD would be lovely to hear the music in admittedly and I did miss that opportunity.

Are you overselling it at all? There’s a lot of hype on this one.

Manage your expectations. This movie isn’t the second coming of Michael, but it’s close.

It has some flaws and there is a kind of hollowness to it in some respects; yet I can’t blame those on the movie entirely.  The 1978 version is one of the first of it’s kind and without a doubt the most well known of its kind. John Carpenter and Debra Hill gave us something new and visceral then that Black Christmas (74), The Hills Have Eyes (77), The Town that Dreaded Sundown (76) and even Texas Chainsaw (74) just didn’t quite hit. Since then we have had 40 years of horror, with a majority of them being slasher flicks. There is next to nothing we haven’t seen before you can do in this genre and we all are a bit jaded here in 2018.

That didn’t stop McBride, Fradley, and Gordon Green from doing their best.

Personally, I think their best is good enough and this is the Halloween movie we need right now.

Edit: Because I included the original theme in the original review here is Carpenters take on it 40 years later