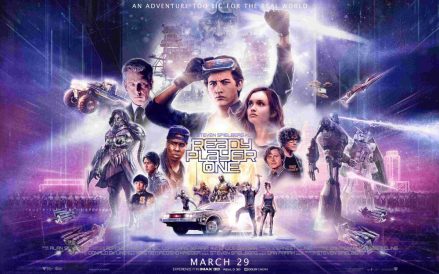 I was born in the 70’s. I am a child of the 80’s. The better part of my teens were the 90’s. I had a friend with an Atari. I had the Nintendo, the robot, the gun. I remember all the Saturday morning cartoons and weekday ones. I remember hundreds of reruns of the cartoons and shows of the 60’s and 70’s. I spent a summer watching all of Lost in Space since it was on syndication when the pool I went to every day was closed. I did plenty of things on my bike, in my neighborhood, and with what few friends I had I consider reckless and can’t explain beyond “it seemed like a good idea at the time.” I was unbeaten in my high school at Star Wars trivia (ooh big title I know! shiver in despair *rolls eyes at self*).

I’ve also been riding the pop culture surge like everyone else. So this movie is all but made for me and everyone like me, with its heady dose of pop culture and nostalgia that the trailers promised.

Should you play the game though?

The movie is of course based on the landmark novel by Ernest Cline of the same title. Beyond that Cline is probably best known for his script for the Star Wars buddy road trip movie, Fanboys that was released 2009. Fanboys, like Ready Player One focuses on people who are obsessed with pop culture though that one is specific to Star Wars, RPO goes beyond that….way beyond that. Cline himself was hired for the script, which levies most of the “Its not like the book” arguments mostly null, and Zak Penn was brought on to assist. Penn is a mixed bag for me as a writer. His first script, which is a fan boy view of a film genre, The Last Action Hero gives him good credibility to be here alone. That said, he is also on the script for X Men The Last Stand, Elektra, and Inspector Gadget.

The story is as the trailers promised. Bland Token White Boy with SuperHero origin is an obsessive gamer who absorbs pop culture like most people breathe.  He and millions, if not billions, of others are trying to find the literal keys to the Kingdom of a virtual world; racing against the evil big business IOI (eye oh eye, not one zero one) who wants the kingdom to well monetize people. The movie is a touch prescient in that regard considering recent news stories about data. Along the way he meets and makes friends, rallies the Oasis, …and….well any more I’d be spoiling right?

The movie is absolutely generic in its plot. It’s not quite the heroes journey, as it doesn’t have enough of a fall in it, but it plays out with more than a few beats lifted from A New Hope. It exists. It’s fine. It does no real harm and has no real weight to it. There’s no real risk involved or felt for our main hero and while the movie without question celebrates the history of pop culture from the icons, to the music, to the actual history, it doesn’t put any real gate keeping on it. The phrase I dreaded hearing never came up. “Only true fans” ….Goddess I hate that phrase. The success of the hero isn’t his alone and there are other factors that keep it from being an absolute gatekeeping boys club. It honestly saved the movie for me.

From an acting perspective, Tye Sheridan (X-Men Apocalypse, Scouts Guide to the Apocalypse) as Wade Watts is as bland and forgettable as they come. He is so generic that he makes Kristen Stewart in Twilight look positively animated by comparison. I think this is by design. I hope this is by design. What likely isn’t by design is his total lack of chemistry with Olivia Cooke (Thoroughbreds, Bates Motel) who plays our female heroine Art3mis. She should have been the lead. We should have followed her. She’s dynamic, she’s engaging, and one of the more interesting characters. I’d watch a movie with her and Aech alone. The actress tried her heart out to do something with him, and nothing. I’ve been looking at photos of them all at press junkets and tours. He looks so bored and unengaged, while she is electric. The same goes for their characters. The epic speech from the trailer? Yeah it’s there. It’s like that.

From the other characters the only real standout I can mention is Ben Mendelsohn (Rogue One, Slow West). I feel like they took all the feedback given about his attempt at villainy in Rogue One and made that a character. It made him easy to be in the role, but he’s otherwise…unremarkable. Others exist, one is slightly above the rest, but they are otherwise also…unremarkable.

Visually. The movie lives up to its hype. It’s Spielberg doing literally what made Spielberg Spielberg (this is such an odd sentence and represents much of what is wrong with the English language). This is literally what a PG-13 version of VR could and probably would look like. The PG-13 is important. I’ve seen Second Life. I know what happens when you get to R. The CG is allowed to look CG there and it works with the lighting choices Spielberg always makes. What impressed me most here in the Oasis action scenes is how busy it all was but you could still follow the action you wanted to. Just when it would edge on too much or too hard to follow they would slow it down and let you get back on the road. This is Spielberg here as we’ve seen lesser directors leave shots like these a mess. That same logic holds true through the rest of the film’s main sequences giving you just enough chaos to look right, but enough room to follow said chaos. It gives you the time to see the cameo (barely) and move on.

Yes, the cameo’s. The trailers didn’t show us everything. Yes, you will still geek out when you see them on the big screen. Also in the technical win department is the music by Alan Silvestri. Composer of easily one of the greatest themes ever, Back to the Future, he channels that skill once again and provides the epic. The soundtrack that accompanies is also appropriate for the film. Beyond that though is a plodding editing that leaves the movie running over two hours and starting to feel it at the 90 minute mark.

Ready Player One is absolutely harmless pop culture and popcorn fair. It is a bland, unremarkable story of bland unremarkable characters doing things we’ve seen a hundred times before. What keeps it afloat is that love of pop culture with technical masterwork and that’s what will get the butts in the seats for it. It won’t keep them long though. It doesn’t have anything more to it.  It’s a visually arresting film that does everything it can to make up for the deficit the material and acting have.

That’s it. It’s Ok. It’s not bad (again thanks to the FX and Nostaligia Glasses) It’s not great or genre redefining. It’s the first real popcorn movie this year and it’s overall just there. I laughed a few times, I did enjoy myself so it came out better than I was expecting.

Should I go watch it?

Yeah, why not? Grab some popcorn, a coke, relive the nostaligia. Escape for a few hours. The real world will be there, and the movie won’t do any harm.

On the big screen probably not. I couldn’t tell if the 3D helped the movie, but it didn’t hurt it either.

On the big screen eh?

Yeah, I am buying it. I like hundreds of others obsessive geeks will buy it. Then rip it. Then go frame by frame to look for all we missed. Ok. I probably WON’T do that, but it crossed my mind. Though when I do buy it, I expect a lot of pausing to go hunting for my own little Easter eggs. I know they are there.

The product placement. Oof. I should be offended, but somehow I am not. I think just the nature of the movie made the Pizza Hut and Doritos and Tab just…make sense?

Have you read the…

Have we met? of course I haven’t read the book. It’s kinda a thing with me and movies.

Next week I plan to see “A Quiet Place”, then Rampage after, a week off, then Avengers Infinity War.

There it is folks Ready Player One. It’s OK. Considering the rest of this year so far, that’s pretty good. This could have been a lot worse.