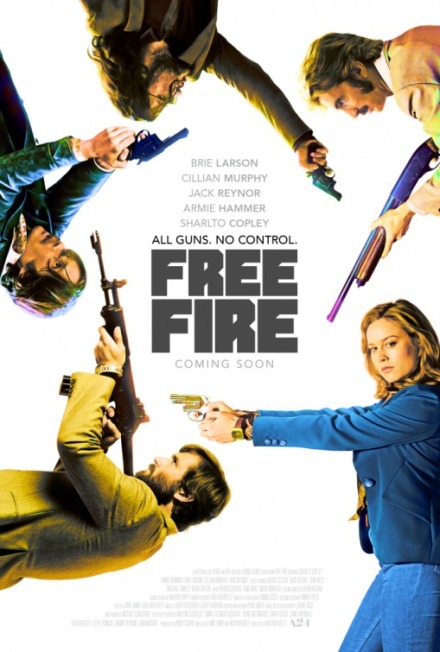 Haven’t heard of this one? Yeah few have. It’s kinda an under the radar indie flick from production studio A24. I came across the trailer on YouTube one day a few months and thought “Hey this looks kinda fun and like a Guy Ritchie movie!” I like Cillian (pronounced Kill-ee-an if you didn’t know)  Murphy quite a bit. Brie Larson is largely unknown to me, but she’s going to be playing Captain Marvel so I was curious about her, and Sharlto Copely is usually memorable in whatever he does.

Just to see if you are interested – here you go. This is NSFW (language mostly) –

So I was promised something, but did the deal go south?

The movie, if you couldn’t tell by the trailer is a love letter to 70’s action. Not just content to set it in the 70’s but also feel like how an action film would be back then. The action is tight. It is contained. The entirety of the movie takes place in a single building; which does take some incredible precision and vision as a director. At the helm for this then is Ben Wheatley, who also directed last years critically acclaimed film High-Rise. I had the opportunity to watch that one and never could bring myself to review it as I wasn’t sure how I felt about it by the end. Still couldn’t tell you. I know it was expertly directed and well acted but my brain was confused about it. Not so much on the confusion here. Wheatley clearly has vision as a director and knows how to get the best performances out of his cast and the camera.

I could talk about the script and story by Wheatley and Amy Jump (screenplay and editing on High-Rise). It’s straight forward – gun deal goes south. The trick is to maintain a healthy level of tension, realism, and character goals. The movie verges into the absurdist without ever crossing that line as much as say Hot Fuzz does, but still has the humor from the characters themselves being just bloody odd. My only gripe and it’s a single throw away line, but that makes it bother me a touch more – just because you can use a word or words because they were period appropriate doesn’t mean you have to. It’s a single line but it was jarring in the moment for me and wasn’t needed as it never came up again. Unlike say Tarantino who still feels like a kid able to use all the bad words simply because he can.

The actors are good. Murphy, Larson, Copley are just fine. The one that steals the show though is Armie Hammer as Ord. I was wondering about him after The Lone Ranger and The Man from U.N.C.L.E. but he really is charming when he has good direction. He absolutely stole every scene when he was the center and I loved him most of all. I have an idea about Larson now as well and can only say I am looking forward to her turn in the tights as Captain Marvel.

From a technical standpoint – it is shot really well with generally clean action and shots that help progress the story; then allow you a few moments to breathe before the next action piece. Unlike many films today, an intentional move by the director, gunshots hurt. A lot. The actors carry that through the movie and it works for and against the movie. It wears old at the 60 minute mark as the injuries have taken their toll and it becomes very quickly more of the same.

I think the deal went east on me. I can tell the actors had fun. I can tell the director succeeded at his vision. I can tell it is well shot and hit the vibe it wanted to. I also think the trailer  lied to me. It’s funny – not THAT funny. It’s got action – not THAT much action. It also has some pacing issues as the conceit draws a little long. The characters, even the unlikeable ones are memorable and charismatic so that’s a win over a lot of other films and another tip of the hat to the director.  I mean it is a film about arms dealers – how nice could they all be?

One other huge credit on this film worth mentioning in the positive column – It is ORIGINAL. It is different. That should be celebrated!

Should you watch it?

If you can handle a subdued slow burn 70’s style action? Sure. Otherwise nah. It’s everything I expect to come out of this production house so any real disappointment is on me.

How is the action?

It is not action like we are used to. I appreciate that.

I am really really hoping we get Sleight locally. Check this trailer out –