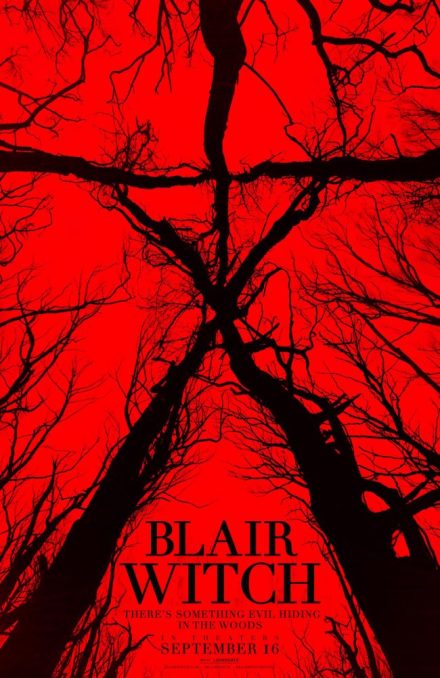 Little known, not so secret. I have never watched The Blair Witch Project. It didn’t interest me enough when it came out, despite being filmed not too terribly far from my old stomping grounds in Maryland. Ok that isn’t saying much. If you make the wrong turn or get lost in Maryland you end up in another state. It isn’t that hard. I have however watched the more Hollywood style sequel that came out a few years later Book of Shadows: Blair Witch 2. It was…*sigh* maybe I will review it. But I do recommend GoodBadFlicks review of it to understand why it is the way it is. If you’ve read my other reviews, you know I am not a fan of the shaky cam so I really do not know what I was thinking going into the theatre tonight.

Was it the curse of the witch that drew me in or a masochism streak the size of the Chesapeake Bay?

Written by Simon Barrett, after successes of segments of the V/H/S movies and more notably You’re Next. I have to say I can see some of his stylings from those films here as well. His protagonists are prepared, they are smart, and react well to the strange.  It’s important to note that yes the characters here ARE smart. What happens to them in the film is only rarely due to raw stupidity. I am also not talking Final Girl Trope smart. They go hiking in the woods with batteries, cameras, GPS, a solid first aid kit, and most importantly a plan. That said the premise itself is straight-forward and enough to get it going but with mild stupidity required. A video surfaces with the protagonist , James, sister in it who went missing when he was 4 in the Black Hills Forest just outside of Burkittsville Maryland. He wants to find out what happened to her and brings his best friend, his not girlfriend, and best friends girl to help him. The reason for the camera work is of course one of them wants to film a documentary. Of course things do go wrong…

I appreciate the logic this time of the documentary portion as you have multiple events that have happened here. There is a passing reference to the original mythology, the original movie, and even a single line acknowledging the second. Some of the credit has to go to Barrett’s collaborator and the director Adam Wingard. These two work well together and I hope to see more from them in the future. Wingard has a gift here and brings real tension with a few well placed jump scares that didn’t annoy. Unlike Don’t Breathe a few weeks ago I did feel the tension build as I knew *something* was coming but not sure what. How he decided to have them shoot the woods, the house in the trailer, it’s done rather well – especially as the movie builds. My only technical peeve with it is voices don’t echo in the woods like that and the animal howls used were coyotes…I know because I am listening to them outside my window and down the street right now. They found a meal.

All the actors do a fine job. James Allen McCune (Shameless) as James is the boy with the lost sister and while the concept requires his IQ to drop significantly to execute, he lets it show the rest of the time with otherwise good decisions and solid reactions to the terror of the hills. Callie Hernandez (Alien Covenant) plays our filmmaker, Lisa. Again tech savvy, well planned, well done. Corbin Reid, Brandon Scott, Wes Robinson, and Valorie Curry (Detroit: Become Human) all deliver equally well and are believable in their roles.

Technically, I’ve discussed some of my issues with the sound and irritation at that. Other sound is fantastic, as is the distinct lack of soundtrack. Lighting, such as it is, performs it’s task equally well and helps add to the claustrophobia of the woods. Think about that sentence for a minute, but it works. The jump scares only are annoying once or twice as I found a few of them just a bit much and others…they work. They did know how to use steady cam hiding it in the other technical details of the camera, but there is of course shaky cam and built in static as the movie goes through. It isn’t bad, but could be for some people. It does make me sad they didn’t film in Maryland again, while they may not have been able to film in Burkittsville, there’s a lot of Maryland that looks like what they needed. Yes, I could tell they weren’t there.

I rather enjoyed the movie. I did feel the tension in the places I was meant to. I was oddly invested in the story and overall didn’t find myself annoyed with the main characters. I noticed a lot of little details that should make you question what you see and what you believe. The movie succeeds intelligently in creating a haunted wood and you are left to decide what happened, what didn’t, what you saw, what you didn’t at the end. I like that question. I like the answers I received and the questions I had.

If you are a fan of the series? Yes. A fan of horror yes. You don’t need XD or anything special. It also may be better to see it in a a near empty theatre as the sound works and excess background noise can detract.

Will you buy it Jess?