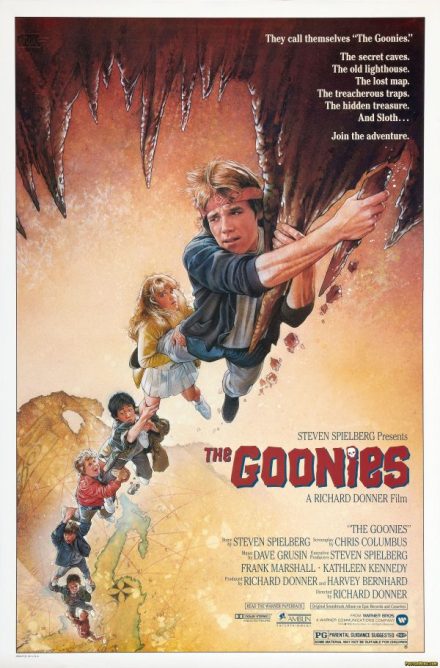 What? Like I could start this review any other way? If it’s good enough for you. It’s good enough for me. I do remember seeing this in the theatre and I still have my map, my  school folders with Goonies on it, the book is somewhere. Heck my desk at work has a Goonies Never Say Die coffee mug. So to say I love Goonies is a mild understatement. Between it and Monster Squad they may be two of the most important films of my childhood, certainly in the top 5. Certainly the most watched (due to accessibility) of my childhood. I even got this as a present one year from my ex because she knew how much I loved it.

30 years and a lot of mileage later, how do I feel about it?

It’s a miracle. It is a perfect storm of talent in the right time of their lives, and the perfect blend of behind the scenes. You have a story by Stephen Speilberg (I am not listing his credits…), with a screenplay by Chris Columbus (Gremlins and director of the first two Harry Potter films), and directed by Richard Donner, you know the guy who gave us Superman and Lethal Weapon? This is a beautifully paced children’s adventure film. This isn’t nostalgia going either. I really watched it this time, looking for what doesn’t work now. There are a few things, don’t get me wrong, but overall it is an amazing film that holds up 30 years later. There are absolutely no scenes that need to be cut to trim despite its 114 minute running time. Yeah, almost two hours and as a 9 year old I was butt in seat, mouth shut watching. It goes from beat to beat to beat with an experts hand. There’s even a scene missing that while it pains me that it’s gone, I think makes for a more dramatic moment.

I will never betray my goon dock friends

We will stick together until the whole world ends

Through Heaven and Hell and Nuclear War

In the city, or the country, or the forest, or the boonies.

I am proudly declared one of the Goonies

During the Wishing Well scene Andy takes the Goonie oath…but adult me sees the dramatic moment of seeing the sweater come up unexpectedly as a better scene.

The actors sell it though and in a time when Hollywood actually used kids for these adventure films, we have a Sean Astin (14) as Mikey, Jeff Cohen (11) as Chunk,  Corey Feldman (14) as Mouth, Jonathan Ke Quan (14) as Data, Martha Plimpton (15) as Stef, Kerri Green (18) as Andy, and Josh Brolin (17) as Brand. Little known fact – this is Brolin’s first movie and Astin’s first big screen performance. The kids made the movie so identifiable to me then, and probably so many of you because they were *our* age, they were going on this adventure like we all imagined doing as kids. I * was * Sean Astin in my head, I was Mikey (and secretly Stef or Andy).I won’t count the number of times I always hoped to find an old treasure map in my attic. The adventure though wasn’t for thrills or curiosity, but for their families and each other. It’s what really separates it from a lot of other films and makes it mean more. You don’t really think about it, but I think it gets to you and you feel it. These kids are putting themselves in mortal danger out of love. That counts for something. You don’t roll your eyes and go why are they doing this? Why are they being so stupid? The kids themselves keep trying to give up early on and press on to do what they came there for. In the end they even give it all up for the lives of their friends.

The kids were cool, the bad guys were cool. What an opening to a film? In media res? The break out already in progress. Anne Ramsey is iconic in her role of Mama Fratelli (even with the horse sound dubbed during the one sequence), with Joe Pantoliano and Robert Davi as the brothers. Just as much as the kids were family, so were they. Dysfunctional and criminal, but family. Ever noticed Jake’s face when Mama is about to put Chunks hand in the blender? Watch it again and it’s the face that should follow after his previous line.

Writing it down it seems more sappy, but the way the actors sell it works so well. You buy the chemistry between these guys. Scenes I noticed more now, Brand dragging Mikey into the house after Perkins comes by. Mikey is still hugging him and Brand shows his affection then continues the hug as he walk/drags Mikey inside. It’s a little thing, but it counts. All the lines Mikey mutters under his breath. I didn’t hear them all before, but I did now and they make it work. Mouth and the Wishing Well. I was the child of divorce already then and I identified with him so much. I wanted my wishes back. All of them. What Data’s father said to him I always wanted to hear someone in my family say to me. These things made a film identifiable then and now and let it hold up to kids then and now. As you can see this is an incredibly personal movie to me, and a definitive one, but even with all that going to the way side – it holds up. These are kids and they feel like kids going through this. They make mistakes, bad jokes, and feel like true friends on this adventure. I miss this genre, kids going on adventures, and wish we had more like it coming out. The nearest ones I can think of that is even close is something like Super 8 (which I apparently need to review) and  Ok…Harry Potter counts too.

Beyond the pacing, story, and editing. It’s a product of it’s time in the prop and set department. This is a compliment as so much of it was done practically. The Inferno was real folks. I miss seeing the squid. The traps were kinda awesome. Data’s gadgets looked like something he would build.

I think I could go another thousand words talking about how awesome this movie is. If you ever had a sense of adventure, that spark to do something exciting you know this movie is for you. I honestly believe that this film holds up all these years later and while there are some flaws, it really is just a small miracle of the right people, the right time, and the right places. It was absolutely worth seeing on the big screen again and if you get a chance you should do the same.

YES. Why haven’t you watched it yet? Too busy Truffle Shuffling?

I honestly, deeply, and truly believe every kid should have this movie as part of their lives. If nothing else, but to spur the imagination. We need the adventure!