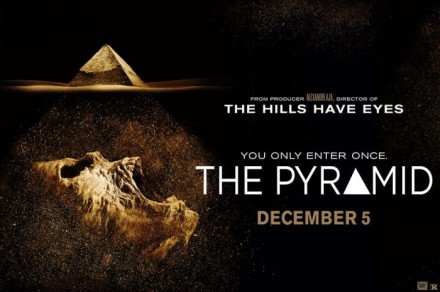 This is a 3 review week folks. Today you get the Pyramid, Wednesday you get the Hobbit (Goddess help me), and Thursday or Friday you will get Annie (Its a hard knock life for me). Now obviously, this film came out a few weeks ago, but I had neither the desire nor time to see it when it first came out. Tonight, I really wanted a break from DragonAge:Inquisition (120 hours does that). Only one of the theatre managers at my local cinema was in, but we chatted and he tried to warn me. Was he right?

In what seems to be quickly becoming the trend in found footage genre, Archaeology! Reminder, if I could have any other career – it probably would be archaeology. Archaeologists discover something, go exploring against better judgement, and bad things happen with a hint of a supernatural bent. Archaeologists are our new paranormal researchers. Maybe we will get someone to go to the Mausoleum of Qin Shi Huang? Petra? Some lost site in ancient Persia, with the Iranian and Iraqi conflicts as a back drop? Perhaps the Shore Temple in Mahabalipuram, India? Chavin in Peru? All of these places are ripe for it. I mean we’ve already had the Catacombs beneath Paris and now Egypt.

Really the synopsis is the same. So called Archaeologists, one who prefers old techniques and his daughter who believes in state of the art, uncover an unusual pyramid with only 3 facings amidst the Arab Spring and events in Cairo. They are far enough away and honestly, based on the satellite image they showed, I am not sure they were actually in egypt but it was only a glimpse; yet that provides a pressure based backdrop to allow for poor decisions. Really beyond that and the film crew with them trying to get a documentary on the unusual pyramid and these new techniques for discovery we’ve tread this ground before. They enter the pyramid. They get trapped. Something is in there with them. These are not spoilers, this is in the trailer. Bad things happen.

It’s almost like Thunderdome, X people enter. Y people leave. The uninspired script is by Daniel Meersand (nada to credit really) and collaborator Nick Simon (same deal). I won’t say the script was bad, but it was uninspired. You need to make at least some of the characters likeable for me to wonder if they will live; or more precisely care if they die. I shouldn’t be eager to watch them die just for them to shut up. Every – last – one just needed to die. Combinations of ignorance, self righteousness, and general panic just made for bad combinations in dialogue and personalities. Along with that many of the questions the movie tries to ask are never quite answered. Plots are introduced, but never followed up on satisfactorily or at all. They become just another wasted detail.

Obviously the writers can’t take all the blame, but they will get most of it here. First time director Gregory Levasseur is no stranger to horror, as he was a writer on films such as High/Haute Tension, The Hills Have Eyes, and P2. With that pedigree I expect something more. I also think he might be able to be blamed for script decisions. A writer who is now a director should have seen the script and known to make changes. If he did make the changes that result in this final product, then he is equally to blame. If he ignored problems and filmed as is with only minor edits, then by omission of action he is guilty. I also must blame him for the performances he coaxed out of his actors. None of it worked. Honestly, nothing in this movie worked.

Even the acting was mediocre at best. I would list the actors, but I don’t want to chance ruining them for people if they have actually seen anything these individuals are in. There’s just so many bad decisions made and the performances they give only amplify my aggravation. Compounding that is some fairly horrific CG work at times. It just fails.

This movie fails on every conceivable level, beyond its pure concept. I love the concept, the mystery of a lost pyramid of a design we’ve never seen before? Buried in such a way it must predate the trio on the Giza plateau? Awesome. Then…well failing on every other possible level.

Do not enter the Pyramid folks. The curse is boredom and annoyance.