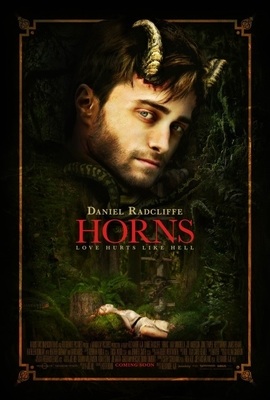 First, as in before we get into the review, let me give you the teaser that got me interested in this film in the first place.  Since most of you have not likely even heard of this film, it can provide a good grounding.

Ok, now that this is established the trailer sold me on a certain mood for the film and a certain tone that I should expect. Daniel Radcliffe seems to be rocking the American accent and well, lets face it the horns look interesting.  I had no idea it was based on a book (until the trailer spelled it out and still hadn’t heard of it), but then again what isn’t these days. Sadly this film is largely indy and only has had limited release so even if most of you want to see it after the review you may not be able to. I have been waiting weeks to see this and one of the art house style theatres in Tucson was actually showing it. I had to admit I was surprised. So my surprise aside in the fact it was being shown, do I regret seeing it?

The story is written by Stephen Kings son, Joseph Hillstrom King, aka Joe Hill. That said it explains why the movie was set in a place that could be Maine, but could have been the pacific northwest. Now when I say story, I mean the novel and story credit. The screenplay, under Hill’s eyes was adapted by a man named Keith Bunin who has almost literally done nothing else in the industry.

The story focuses on Ig “Iggy” Parrish, a boy in love with a girl in a town that doesn’t want him – especially after her brutal murder. He swears he didn’t commit the murder and no one but one of his best friends since childhood believes him. After a particularly bad night Ig wakes up with …well Horns. Not just that but they seem to have power over others, power he hopes he can use to find the person truly responsible for the death of his one true love Merrin.

So at its heart the movie is a murder mystery wrapped in young adult horror, romance, and the blackest comedy. Which underlies the problem of the movie. It runs a two full hours and feels it. I don’t know what tone they were going for, but its a mixed bag across all of those genre’s. It is also not subtle in the least, which I don’t know is to blame on the source material or director Alexandre Aja. He too is a mixed bag where I don’t know quite what to expect of his films and now as I write this I think that might be intentional. Aja has previously directed Haute Tension, released in the US as High Tension which was considered fairly good by those who I’ve spoken to about it. At the same time he gave us the 2006 remake of The Hills Have Eyes, Mirrors in 2008 (don’t remember it, no one else does either) and the ever infamous Piranha 3D in 2010. Piranha I think covers a portion of his style quite aptly. There is ridiculous humor, disturbing to look at horror/gore, and then the spring break T&A over the top.

Thats it. He goes over the top. He goes to 11. The downside is, I think, he needs someone to turn the dial back down. The movie starts out this beautifully moody, atmospheric piece of art. It then descends into his fathers tropes of the childhood friends with the requisite “fat kid” who is almost never called by his own name. The flashbacks are, for their part, bright and colourful while the current time frame is always a bit darker and a bit more grey. To this he gets credit in intelligent design choices. He also loses those points for the films lack of anything resembling subtly. Eve’s Diner, with an Apple as the logo? Really?

Direction and bad editing on the film aside, the acting is fantastic. Radcliffe owns the screen. He doesn’t chew scenery like Jeremy Irons does, but instead masters it. You want to watch him, even when he is being emo and moody. He just exudes something special and the movie is all the better for it. His emotional range is top notch, with a perfect accent. He commands pity, rage, and fear in equal measures and also has a certain sexiness to him as well. While I haven’t seen the Woman in Black, this does make me want to watch it.

The supporting cast is solid, but not nearly as interesting. You have Max Minghella (The Darkest Hour, Ides of March) as his best friend and Joe Anderson (Across the Universe, The Grey) as his older addiction laden brother. More famous faces such as James Remar (Django, Korra, and a lot of other things),  Kathleen Quinlan (Hills have Eyes, Event Horizon), David Morse (Treme, Green Mile), and Heather Graham, who I think may be reincarnated Elizabeth Bathory as she does not look 44 in this movie, rounding out the cast. Of course, I also need to talk about Juno Temple (Maleficent, Killer Joe, Jack & Diane). She plays our deceased girl, through flashbacks of course, and has a presence all her own on screen. I don’t know that I felt her and Radcliffe had onscreen chemistry enough for me to buy the romance, but she does a rather good job through the film in conveying all her character goes through.

From a more technical standpoint the Horns look awesome. Not a surprise when Greg Nicotero and Howard Berger worked on them. The enhanced visual effects were not as clean, but anything that was practical – which was a lot – looked fantastic.

But Jess ( I imagine you asking) should I see it?

Well to be honest, not really. It’s a good film, but not a great film. It had some entertaining beats, but was too slow for too long in others. The humor didn’t always work and because of that a lot of the movies entertainment value falls a bit flat. I don’t know if it needed another polish on the screenplay or a more experienced editor or…I don’t know what precisely would have fixed this movie, but it does need fixing.

If you are a Daniel Radcliffe fan or a fan of the book I think you should be safe to see and enjoy. I was entertained, but I really don’t think everyone will be.

Coming in blind, its a bit of a mess, but you *might* enjoy it. I can’t promise you will (or should) so I can’t say with all my usual confidence avoid it or watch it. It exists as a solid film in the indie realm with some serious starring power in Daniel Radcliffe. I think anyone else in the role the movie dies – and that is a problem.

Horns seems cursed by not knowing what it wants to be. Maybe Alighieri could come and give it a tour next time and it could have been a touch better.