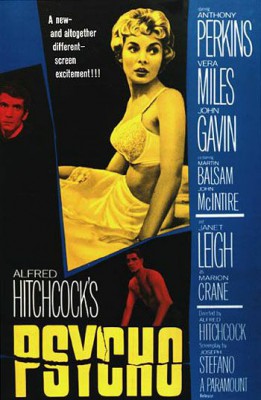 I have to admit, I had never seen this movie fully until this day. Oh sure, it was impossible to not be aware of all that comes with it. There’s no twist for it anymore, there’s no real surprise. While there is some argument over what a slasher film is, I will give my definition first:

A film in which the primary weapon used for murder is a bladed hand instrument that can be use in a motion that strikes across the victim (you know a slash). Stabbing is also a method in which the victims may be expirated.

We don’t call it the stabbing genre though. We call them slashers. While Halloween is sometimes attributed as the first Slasher, it’s body count can help support that, Texas Chainsaw Massacre came out four years prior. There had been films in the 40’s and 50’s that dealt with murder, but perhaps the one that inspired the rest since then – Psycho. Because of the nature of this film and it’s influence on modern cinema, I really want to spend some serious time discussing it. So I give you fair warning now, if you just want to know about seeing it – go to the TL;DR; otherwise, let’s talk Psycho.

I want to open this with the trailer. I don’t think we’ve ever seen anything like it before or anything since. Let me share first –

Hitchcock himself, just talking on screen. He tells us about the motel, so unassuming, then moves to us to the house. Even the music is light hearted as he speaks about diabolical acts. He then tells us about the movie, I don’t mean lightly – HE DESCRIBES THE DETAILS; all of them, then…he stops. Teasing us with descriptions. He keeps hinting and how horrible it all is. How gruesome and even indescribable some events are. Through out this trailer he masters the concept of the tease, he begins to talk about something then cuts himself off – it is magnificent. The unfinished descriptions leave us wondering, but also tell us when and where to pay attention in the film. He also speaks of this as if it were real. It is absolutely brilliant. Again, to my knowledge nothing before, nothing since. I don’t know that anyone could do it now. I don’t know that anyone is that skilled a director to even try. I am sure some might consider it, but would the studios allow such a thing? Probably not, but I almost want someone to try.

Of course, the trailer just gets us in. Then there is a script by Joseph Stefano pretty much an unknown at the time, but would go on to write and produce for one of the greatest sci-fi/horror shows of all time, the Outer Limits. The script may have been written by Stefano, but it was based on a novel by Robert Bloch one year prior, thus proving Hollywood has always been basing their films on a book. Bloch would also go on to write for Hitchcock himself, on Alfred Hitchcock Presents. Now, not having read the book yet, as is normal for me, I am going strictly by Wiki here. I know how dangerous that is, but the final screenplay is pretty much lock step with the story. It is worth mentioning the story could be inspired by the, at the time recent, arrest of Ed Gein, one of the most famous American serial killers. Texas Chainsaw Massacre was also inspired by Gein, as was Buffalo Bill in Silence of the Lambs. Though it is said Bloch did not research the Gein case beyond the news, it does also prove how much art may imitate reality when the stories are locked at side by side. As an aside, I know way too much about serial killers.

To sell this sort of story you need good actors. We’ve seen in recent decades, now 54 years later, what happens if you try this without mediocre or bad actors. Let’s work up the chain shall we?

John Gavin (Spartacus,  is our start, playing Sam Loomis the fly by night lover of Marion Crane. He is a man we in the modern age that many can relate to. He has debts from his family, debts from an ex wife he needs to pay alimony to, and a woman he loves that he wants to be a better man for. For the 60s, this is fairly racy, as he is not quite having an affair since neither him nor his lover Marion are married, but there’s is a secret relationship which is at its tipping point. He is perhaps the catalyst for the story as much as anything else and it is because of him we reach a, I suppose the word here is, satisfactory ending to the film. He ends up being the one to stop our killer, but not alone. This leads us to Vera Miles, as Lila Crane, the sister to Marion. She is gorgeous, honestly one of the prettiest women I have ever seen. She is also, as Lila, single minded and focused in attempting to find her sister. She will do what it takes to do so and really only has a weak moment when she confronts something that is worth having a freak out over. She also reprised her role in the sequel twenty three years later. She was a force on screen in the film and able to drive those around her. Though this may be her only real characteristic, it is worth mentioning.

The two left of course are Janet Leigh, as Marion Crane. She already was a name in Hollywood having worked with greats such as Errol Flynn, Gary Cooper, Jimmy Stewart, Kirk Douglas, Frank Sinatra, John Wayne, and Tony Curtis.  Of course, as mentioned in The Fog, she is the mother of Jamie Lee Curtis. Much like Miles, she is also one of the most beautiful women to have ever graced the silver screen. The first 45 minutes of movie focuses on nothing but her. She owns it, every scene. Every bit of dialogue, internal monologue, and blocking. She dominates. She is a near perfect actress in this film, worthy of her Best Supporting Actress Oscar nomination and Golden Globe win for this part. So much of the film relies on her and her expressions and it works. Even the opening with her in naught but a bra and a slip – racy at the time and rarely seen but she made it natural. Then..there is her exit stage right.

The shower. That magnificent scene which all other slashers must compare to at some level. Leigh, never took a shower again after viewing it, it was how vulnerable she felt, how vulnerable we are there that drove her this way. Not the filming as some report. She has to sell her death on screen and does so with the hand (or scream) of a master.

This of course leads us to the master of the house. Anthony Perkins 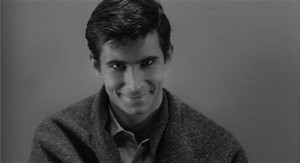 A face only a mother could love right?

It is impossible to not know that face and what movie he goes with. His performance is iconic. He is able to sell us both the dutiful motel owner, the loyal son, and of course Psycho. He is just so much the gentleman, but when the light hits just right you see the glint of madness. Of course, we all go a little mad sometimes, right? It’s both a reserved and manic performance. He demonstrates the insanity perfectly and because of this the final scene is *not* offensive. The police quickly go to “he’s a transvestite” and the doctor quickly corrects them saying no. This is often overlooked, the psychological break within his mind is shown so well, so perfectly by Hitchcock and Perkins that such distortion of the psyche is sometimes culturally benchmarked against this movie. This is what we go to, and unfortunately, as a culture it is for the worst. Despite the film saying what kind of madness it is, we associate the man in a dress one step away from a killer. I blame society not the script.

From a technical aspect, it cannot be understated that Psycho was filmed in black and white intentionally. We love our colour films these days, but there is an artistry to black and white. You have to understand colour to use it. The way to light things and how to make shadows fall on the face are so perfectly done. There is a reason this movie is such a classic and cultural touchstone decades later.

The movie is a masterpiece. I’ve owned a copy of the poster for years, despite not having seen the film just because of how iconic it is. If you really enjoy the slasher genre and you want to see where it all began – watch this film.

If you celebrate classic cinema and have not seen it, as I had not, watch this film.

If such things are not your forte, I would say – try this film. Appreciate the art, but if you still don’t enjoy it there is nothing wrong with that.

This is a film great. It belongs in the top of any “greatest works of film making” list. It may not make someone’s favourite film list, but thats taste and preferences, regardless of artistry. I am glad I got to see it on the big screen, today.

Psycho – a must see film within anyones life time.