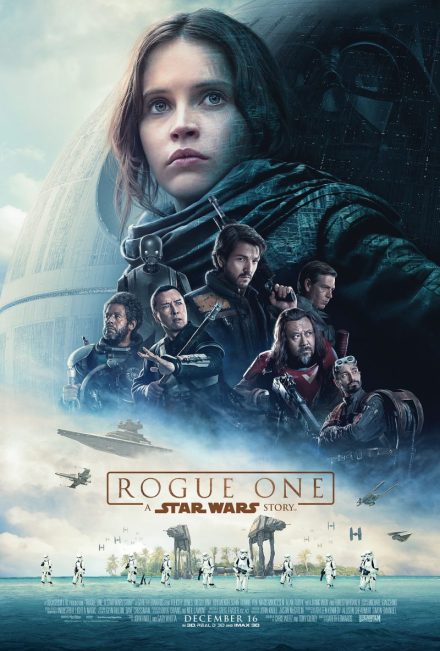 If you remember my Force Awakens review I made it clear how good that one was. What I did not do was share my fan-girl credentials, which in this day and age may get me doxxed or called a fake geek girl. Suffice to say there was no one in my high school back in the early 90’s who could keep up with me on the Star Wars lore. I admit I am nowhere near the obsessive with it I was then, but Star Wars The Old Republic is kindling that flame again. I have felt the hype for this one since the first trailer when I heard Felicity Jones go “This is a Rebellion isn’t it? I rebel.”

So lets cut to it…does the movie live up to the hype?

Directed by Gareth Edwards, who I have raved on before with Monsters and Godzilla, does well with the small character moments and specific scenes. The reshoots, despite what others may say, however are painfully obvious. I can see where the studio and Tony Gilroy came in. I can see the asks, and honestly so can you. Just watch the trailers after seeing the movie. Edwards clearly had a vision for the movie and the studio disagreed, now he has said in a recent interview the “real” reason for the reshoots and what they solved for – but I am not entirely sold on that. While I am certain some pick up shots and additional reshoots may have been necessary; what we have as a final product shows the signs of having come undone at the seams and being restitched to use Riz Ahmeds analogy. The stitches are evident in many places and what I sadly cannot judge is  – were they fully needed.

The reason I say that is there are so many tonal changes in the film, the characters, and plot, – even the look sometimes that you can tell there is something wrong. Maybe it is me having seen so many movies, maybe it is just having my expectations too high. But the joint directing and production of this has created a series of irreconcilable flaws and issues with the film. There are times that they show rather than tell – which adds run time and an unnecessary scene that SHOULD be cut. Ironic as I have been vetching about bad editing all year.

Ok so directing and editing have flaws, but what of the script? The movie wraps with 4 total writers between story and screenplay. Tony Gilroy (Bourne 1, 2, 3, and 4) was brought into direct during reshoots and also has a screenplay credit which means he also got scripting edits in too. Knowing he is also behind the lackluster Bourne Legacy makes me wonder why he was selected to be brought in to help. Chris Weitz (Cinderella, Golden Compass) also has a screenplay credit and I sort of eviscerated him on Cinderella’s review too. This adds to my confusion and maybe if I had looked for this before going in I may have tempered my expectations. The story credit (so this is the original writers) goes to John Knoll who was a visual effects supervisor on A New Hope and Return of the Jedi amongst many other really good movies; yet this is the first writing gig. With him is Gary Whitta, who was  writer on the terrifically bad After Earth, but also 2 episodes of Star Wars Rebels.

At this point with these pedigrees – I am surprised the movie is as good as it is. I wish I could see the original script. I wish I could see the original cut. There’s so much good here and unexplored potential. So much that I can see the hints of something better than the final product. I mean the story has a foregone conclusion to it so nothing should come as a surprise, except the fate of our characters. Which we have to be introduced to and care about in the space of 2 hours and 45 minutes.

This is where the movie shines. The actors. Damn if they don’t have charisma and chemistry. Ok sure their performances are bordering on manic at times, but that isn’t their fault. That’s direction and story. Felicity Jones (Inferno, Theory of Everything) is more than capable of carrying the film. She’s remarkable, strong, vulnerable and everything I wanted. Diego Luna (Vampires Los Muertos, Milk, Elysium) does rather well with the complexity of his own character and pairs well with Jones like a fine meal. Alan Tudyk is a gift and a treasure. That is all you need know. Donnie Yen and Wen Jiang are fantastic and add to the story even if you will have trouble remembering their characters names. Ben Mendelsohn, has an unenviable task of trying to be the films bad guy. He has the shoes of Vader, Palpatine, and Ren to fill. He does his best, but lacks the weight of even Ren. I almost wish him and Mads Mikkelsen had switched their roles as Mads has that kind of weight. This isn’t to say he doesn’t give his best effort because he does. It just lacked something – but perhaps that is also the reshoots?

Technicals – ok 94% of the movie is flawless visually. There are literally hundreds of scenes of practical meets digital effects that are only improved. Musically it’s very good. They did a truly remarkable job making me feel like this was before Episode IV. What about the other 6%? Two words Uncanny Valley. You did something. You did it very very well – but it’s not perfect. That lack of perfection is jarring to my eyes and those of the person watching it with me. Two more years of technology advancement and I wouldn’t even notice. I would know but not notice and that is saying something.

The movie is good. The review above puts it through the meat grinder – because it could have been so much better. So. Much. Better. This is my expectations along with some very critical and painful editing choices. Not just the reshoots – which I have to admit may have improved the movie and I don’t know. That said; they may have also damaged it. I really can’t tell unless I could compare.

I know I am going to be in a minority on this one, but the movie is just a solid Good. It is deeply flawed and I don’t have to squint to see the flaws. This saddens and even angers me a bit. It should take more effort to tear this apart and it takes almost none. There’s good to defend, but it’s hard to overlook and defend the flaws.

The actors salvage this. Many of the visual effects shots are so gorgeous they fall easily into the category of best I’ve seen. That is why there’s anger. Because I can see where you did so bloody well. I just wish you had stuck the landing Disney.

I still say yes – but temper your expectations.

Maybe. I can see where shots like the modified AT-AT’s walking out of the mist would be amazing in 3-D.

Are you seeing it again?

Yes and I am hoping I am more forgiving to enjoy all of it a bit more.

Sorry folks. I wish I could tell you this was as amazing as I thought Force Awakens was. It’s good, but it should and could have been better. It deserved to be better.